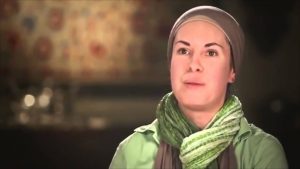 Catholicism and Christian denominations were out because of my previous troubles with them and so was Judaism because of its disbelief in Jesus.

Why did I become Muslim? I can clearly remember the day I officially converted at Al-Azhar Mosque in Cairo, I came right from the state of Connecticut (US), but what lead up to that day remains as a somewhat subconscious, yet continuous quest for God.

As a child, I was always sure of religion and God, but never in the way it was presented in Catholicism. I could never grasp how God could be three (with the Trinity), how we could pray to many people such as Jesus (peace be upon him), Mary and assorted saints, the concept of original sin, how priests could just “forgive” your sins, or why there were hundreds of completely different bibles.

Consequently, these are just a few of the things that anyone, including priests, could ever address or even explain. It was amazing that I went to church and religious education but came out without knowing exactly what I should be doing to be a good Christian. I learned I was supposed to be “good,” “giving,” “caring,” “merciful,” and many other desirable traits, but there was never any practical application for how I should go about doing that.

Without knowing it then, I was searching for a way to connect with the One God I knew and always prayed to, as well as a structure from God that would teach me exactly how I should be carrying out my life. But life went on, and with pressure from my family and objection from me, I went through the initiations into the Catholic Church. Up until college, religion was nothing more to me than a bother on Sunday mornings. God though, was still present.

I happened to go to a Catholic college and thought I would give Catholicism one last chance. I wanted so desperately to reach God. I tried my best once again to find my way through the only means I knew possible and it did not work. I finally renounced Catholicism, so that meant it was time to explore other options.

Catholicism and Christian denominations were out because of my previous troubles with them and so was Judaism because of its disbelief in Jesus. Although I had issues with Christianity, I was always sure Jesus had a powerful message to humankind — the message of worshiping one God. I could never understand how Christians ended up worshiping Jesus himself. I felt sure that he would have never wanted that. This left me with one more option — Islam.

I happened to be familiar with Islam through previous travels in Egypt, so I was open to the possibility of this faith. It was not alien to me, although at the time I did not know any Muslims other than a friend or two in Egypt.

I began reading the Qur’an and searching for information on Islam through the Internet. I remember my first feeling about the Qur’an was that I knew instinctively it could never have been written by a human hand; it was simply beyond that. This was in sharp contrast to my reading of the Bible, which seemed like just a collection of stories written by a man. This love of the Qur’an’s words and the fact that there was and is just one, unchanged Qur’an since its revelation to Prophet Muhammad, may the mercy and blessings of God be upon him, was not the only thing that impressed me.

I felt good about everything I learned about Islam. This feeling meant a lot, so I kept digging, learning, and liking. Most importantly, I found answers to my two main religious issues of the past (only wanting to worship one God and structure). Islam is strictly monotheistic in that Muslims worship of God alone without any partners, and the Qur’an and Sunnah (the sayings and actions of the Prophet [may the mercy and blessings of God be upon him]) give a complete way of life to follow. I finally knew exactly what I had to do to be a good Christian, I had to become a Muslim!

During the last two years of college, I held the beliefs of Islam, not really sure what to do with them in a Catholic college environment. I knew in my heart that I was Muslim, but I did not know how to break that news to family and friends.

After college, I was offered an internship in Egypt and happily returned. I made many good Muslim friends, including my husband-to-be, who helped me officially convert and learn so many things that are important in the religion. I was lucky to have all the wonderful support I received.

It was not easy telling people that I was Muslim. Although some people were glad I found a religion I loved, I have not always received congratulations or even polite responses, but I have become strong because of it. I can defend my faith and I thank God every day that I am Muslim. I remember growing up confused about God and religion. I finally feel complacent and simply happy each day that goes by because I now understand the truth.

Julaybib; “This man is of me and I am of him”