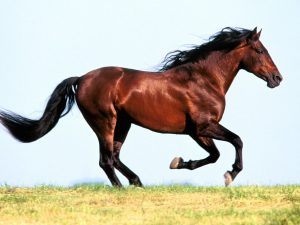 Do you know that after dogs, our most loyal friends are horses? Domestic horses never leave their owners if they are able not to.

These loyal friends can carry us kilometers without becoming tired. Horses are the animals that have helped man most throughout history.

Today, you can see thousands of cars on the streets and there are many motorways built for these cars. Cars, however, came into the service of man only in the last century. At the time your grandfather’s grandfather was born, there were no cars. In those years, animals, especially horses, were used for transportation.

Do you know that you can identify the age of a horse by looking at its incisors? Indeed, since the grass on which horses feed contains sand and dust, their teeth wear out gradually and the degree of this indicates their age. Despite this, however, horses’ teeth are very long. These teeth are similar to long strips buried deep in the roots of the jawbone. That is, compared to our teeth, the roots of horses’ teeth reside deep inside. As the teeth wear out, the part remaining in the jawbone begins to emerge. In fact, the roots of the teeth of very old horses appear on the surface of the gum. Each tooth may wear out about two and a half to five centimeters (one to two inches) before it loses its ability to chew. Think for a moment: had our Lord not given this feature to horses, these animals would quickly lose their teeth and die of starvation.

Our Lord has also given another important ability to the hair of horses. Horsehair serves as a thermostat – a device used to regulate body temperature – for the animal. Their body must always remain at a constant body temperature of 38 degrees Centigrade (100.4 F). To maintain this temperature, the hair of the horse becomes longer in winter. In hot seasons, horses shed their hair, thereby maintaining this body temperature.

Here is another interesting feature of horses: Horses sleep on their feet! Do you know how they manage not to fall down? Because their leg bones have the ability to lock themselves while asleep. Thanks to this ability our Lord has given horses, they can sleep on their feet and also carry very heavy loads. The heads of human beings, however, fall down even when they fall asleep in an armchair.

Horses’ legs are specially created not only to make them carry heavy loads but also to make them run very fast. Unlike other animals, horses do not have collarbones, a feature that enables them to take bigger steps. Besides, there is a bone-muscle mechanism in their limbs that, as they gain speed, decreases the amount of energy they spend and increases their ability to move. The functioning principles of this mechanism are similar to the gear mechanism in cars. Just as an accelerating car shifts to a higher gear, horses, too, shift to a higher gear when they want to run faster. While the force required for pushing decreases, the ability to move increases.

Well, why are horses’ bodies designed in a way to make them carry heavy loads and run very fast? Actually, carrying heavy loads or running very fast are not skills that a horse needs for itself. So, why do horses have these abilities?

“And He created livestock. There is warmth for you in them, and various uses and some you eat. And there is beauty in them for you in the evening when you bring them home and in the morning when you drive them out to graze. They carry your loads to lands you would never reach except with great difficulty. Your Lord is All-Gentle, Most Merciful. And horses, mules, and donkeys both to ride and for adornment. And He creates other things you do not know.” (Al-Nahl: 5-8)

“He [Allah] hath created the heavens without supports that ye can see and hath cast into the earth firm hills so that it quake not with you; and He hath dispersed therein all kinds of beasts. And We send down water from the sky and We cause (plants) of every goodly kind to grow therein. This is the Creation of Allah. Now show me that which those (ye worship) beside Him have created. Nay, but the wrongdoers are in error manifest!” (Luqman 31: 10-11)