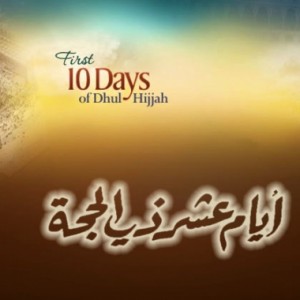 Among the great opportunities and the blessed times for the competitors of Paradise is the first ten days of the month of Dhul-Hijjah.

As Allah describes the sheer bliss in the Heavens which He has prepared for the believers in the Hereafter, He pays the attention the fact that Paradise is the best reward that a person may win. Almighty God says,

Indeed, the righteous will be in pleasure. * On adorned couches, observing. * They will be given to drink [pure] wine [which was] sealed. * The last of it is musk. So for this let the competitors compete. (Al-Mutaffifin 83:22-26)

The biggest prize is Paradise indeed, not anything else. So, the believers should compete to win it through observing everything that keeps one close to God and making use of the blessed times when the rewards are doubled by offering acts of worship as much as possible during them.

Also, it is reported that the Prophet (peace be upon him) said: “There are no other days that are as great as these in the sight of Allah, the Most Sublime. Nor are there any deeds more beloved to Allah then those that are done in these ten days. So increase in tahlil (to say la ilaha ill Allah “No one worthy of worship but Allah), takbir (to say allahu akbar “Allah is the Greatest”) and tahmid (to say alhumdulillah “praise be to Allah”).” (At-Tabarani)

Enjoy watching this video by Sheikh Dr. Haitham Al-Haddad who will talk about the virtues and superiority of the first 10 days of Dhul-Hijjah and explaining the recommendable deeds during these blessed days.

More than A Knock on the Door of God

Beware of the Talebearer

Practice What You Preach

The Biggest Danger to Muslims

A Message for Everyone Who Endures Affliction