The Sleeping Bag of the Parrotfish 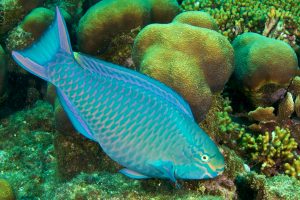 How did parrotfish obtain this protective sheath that they use at night?

The fish shown in the picture is called the parrotfish, since it resembles a parrot, as you may have noticed. This colorful fish employs quite an unusual method to protect itself against its enemies. Especially at night, it covers its entire body with a gelatin-like substance that it produces itself. Before answering the question “why?”, let us see how this substance is produced and used.

This gelatinous sheath of the parrotfish is secreted from the upper side of the gill cavity. The fish secretes the substance while it breathes. After a while this sheath covers the entire body of the fish. By doing so the fish places itself within a kind of sleeping bag and becomes protected from external danger at night. This substance also enables the fish to conceal itself by camouflage. As a vital function, the transparent sleeping bag protects the fish from moray eels, one of its bitter enemies. Moray eels have an excellent sense of smell and can find their prey with it. However, the protective sheath of the parrotfish prevents the moray from perceiving its scent. The moray does not notice the fish in the sheath even if it bumps into it while passing by.

This being the case, one must ask the following questions: How did parrotfish obtain this protective sheath that they use at night? How do they know that their leading enemy hunts by means of its sense of smell? How did they discover a substance so essential in obstructing the moray’s sense of smell so enabling them to spend the night in safety?

Obviously, one cannot expect a fish to decide to produce a chemical in its body and then to cover itself with this substance. Nor could such a thing have developed spontaneously through time. Parrotfish could not consciously plan to produce such a substance and could not make up such a system in their bodies of their own volition; neither could a parrotfish that lived 1,000 or 10,000 years ago. 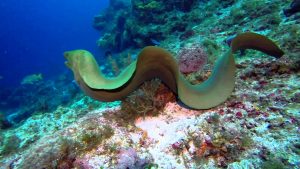 It is a clever method of camouflage that the body of the fish is covered with gelatin, which is totally suitable for protecting the fish from its enemy. It is obvious that such a feature could come into existence only as a result of the marvelous creation of Almighty Allah, the Lord of all the worlds and the Creator of all things.