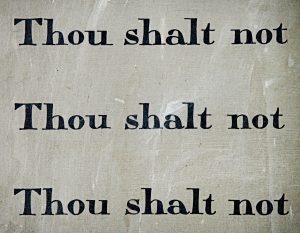 “This is a message from Muhammad ibn Abdullah, as a covenant to those who adopt Christianity, near and far, we are with them. Verily I, the servants, the helpers, and my followers defend them because Christians are my citizens; and by Allah! I hold out against anything that displeases them.

No compulsion is to be on them. Neither are their judges to be removed from their jobs nor their monks from their monasteries.

No one is to destroy a house of their religion, to damage it, or to carry anything from it to the Muslims’ houses. Should anyone take any of these, he would spoil God’s covenant and disobey His Prophet. Verily, they are my allies and have my secure charter against all that they hate.

No one is to force them to travel or to oblige them to fight. The Muslims are to fight for them. If a female Christian is married to a Muslim, it is not to take place without her approval. She is not to be prevented from visiting her church to pray.

Their churches are to be respected. They are neither to be prevented from repairing them nor the sacredness of their covenants. No one of the nation (Muslims) is to disobey the covenant till the Last Day (end of the world).”*

Such were the memorable words of Prophet Muhammad in the year 628 CE, when he granted this historic document, also known as the Charter of Privileges, to the monks of St. Catherine Monastery in Mt. Sinai. It consisted of several clauses covering all aspects of human rights including such topics as the protection of Christians living under Islamic rule, freedom of worship and movement, freedom to appoint their own judges and to own and maintain their property, exemption from military service, and the right to protection in war.

In the spirit of this and numerous other authoritative Islamic texts, one wonders why contemporary policymakers in the West insist on supporting the secular, corrupt, and authoritarian regimes of the predominantly Muslim nations. What is the wisdom of allocating billions of dollars to overthrow, through well-crafted public and covert operations, the popularly and legitimately elected Muslim governments? Have the West’s ‘experts’ on the Middle East, the Orientalists and the national security advisers hijacked Western political institutions as the latter hijacked the legitimate government of, for example, Iran’s democratic Mosadeq regime, or the Algerian peaceful election that guaranteed Muslim control, and many more cases? Should the predominantly Christian West fear and fight genuine Islamic regimes or should it change its outlook by trusting those who uphold God’s Words and Muhammad’s commands above secular and cultural values?