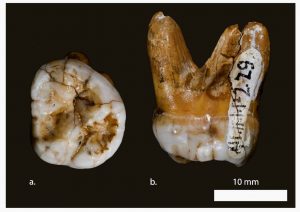 The genetic structure of all people who live today and lived from the past to present is the same.

Emblazoning evolution stories with statistical calculations does not help

The efforts of evolutionists to produce evidence for the so-called theory of evolution also persist with statistical calculations they employ with computer technology. The attempt to bring forth a difference regarding gene sequence of Denisovan fossils sources from this. Because, according to the so-called theory of evolution, living things require genetic sequence changes emerging from a common ancestor gradually in time. According to the imaginary evolutionary tree that Darwinists have drawn with their conjecture, there must be a little discrepancy in genetic sequence between close relatives. Thus, the divergence of genes needs to increase as the kinship moves apart. This is described as “divergence” in statistical terms. Darwinists even take these accounts further. They venture to determine when the common ancestor was singled out, according to the degree of divergence between genes of two living beings. For example, based on claims that there is a 95-98% similarity between human and the chimpanzee genes, it is assumed that their common ancestor lived 6 million years ago. Again, attempts to date back Neanderthals’ exit from Africa to 400-500 thousand years ago were also carried out with such statistical calculations.

Yet there is not even a single evidence that proves of a common ancestor. However, those who read these writings in some scientific journals rely on scientists and think that these assumptions are correct. This is how evolution propaganda is made with assertions based on methods of indoctrination exploiting computations only.

There is also criticism from evolutionist circles about this kind of work. Richard E. Green of the Leipzig Institute and David Reich of Harvard Medical made these comments:

“Their work depends heavily on complex mathematical statistics that make their arguments hard to follow. And the statistical insights, however informative, do not have the solidity of an archaeological fact.” (http://www.nytimes.com/2010/05/07/science/07neanderthal.html)

Denisovan is not a different species, but a human being

The data obtained from the work done is far from proving that Denisovan fossils belong to a different species. On the contrary, there is evidence in the article demonstrating that they are the same as the present day human beings.

In the said article, it is speculated that Denisovan humans entered into relationship with their so-called human ancestors, who had supposedly lived 40-50 thousand years ago. However, even if we were to assume this speculation to be true, that would indicate another evidence revealing the fact that the Denisovan fossil is the same species as human beings. As it is known, only individuals of the same species have the ability to breed and reproduce. And the genes should possess the equal number of chromosomes and identical genes in order to recombine and be inherited in a healthy way.

“The authors’ theory of an early interbreeding episode did not seem to have taken full account of the archaeological background. They are basically saying, ‘Here are our data, you have to accept it.’ But the little part I can judge seems to me to be problematic, so I have to worry about the rest.” (http://www.nytimes.com/2010/05/07/science/07neanderthal.html)

The genetic structure of all people who live today and lived from the past to present is the same. The main factors that enable people to develop different appearances, and height, eye-skin color, etc. are the differences in the working time and speed of their genes. What genes will be activated in which cells, when, and for how long, are determined through markings made on DNA with molecules such as acetyl and methyl. This situation is known as the turning on and off of the genes according to changing conditions and needs. This magnificent regulation and active control system, ongoing at any moment, is again managed by certain DNA regions. Giving an account of this control mechanism, which requires a very precise arrangement, only through genetic sequencing is beyond the bounds of possibility.

The features of DNA codes, such as offering intelligent solutions and taking initiatives, cannot be attributed to DNA itself. There must be an intelligence that directs and knows how to regulate various regions.

As we mentioned above, according to the first data of the Human Genome Project, the difference of genetic sequences between human beings is less than 0.1%. Much of these differences stem from modifications that cause genetic diseases, and the differences in sequences that differentiate us from each other and cause us to be perceived as foreign entities, such as the MHC protein gene. Other than this, the genes that keep our vital functions operating are the same in all of us. As is known, a single letter change in the DNA sequence or the addition or deletion of a base causes the degradation of the protein to be produced. Even very small mutations may cause diseases or fatal outcomes. For this reason, there is no place for random mutations in explaining the differences among human societies. The emergence of different human types is because of the turning on and of of genes, and the variation within species.

As you can see, the idea of evolution is attempted to be upheld for ideological reasons, but not in the light of scientific principles.

Darwinist ideology, which is the mainstay of the separatist and divisive movements that feed racist ideas in society, invented a tale of a family tree from primitive to modern man. In order to keep their fairytale alive, there was need for a “hominid” animal species that lived in the past but have not yet become human, or in other words have not completed their evolution. That is why Darwinists time to time invent such so-called primitive “hominid” species. The Denisovan human was thus fabricated as a figure fitting into this myth of the so-called primitive man.