A Tale of an Old Shoe 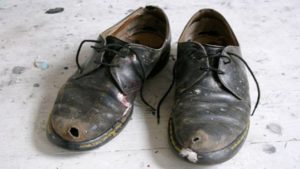 “I have just learnt a lesson that I will never forget the rest of my whole life.”

Once upon a time, a wise Muslim scholar accompanied with one of his students were walking in the middle of some remote fields.

While they were treading their way, they saw an old shoe which they thought belonged to a destitute person who must be among those who work in the nearby fields and who is going to finish his work and come back soon to collect his old shoe.

The young student turned to his master and suggested:

“Let’s have some fun by hiding the shoe of that worker and hide ourselves behind these nearby trees to see his bewilderment and confusion when he comes back and finds out the missing of his shoe.”

“My son! We shouldn’t enjoy ourselves or find amusement at the expense of the destitute and the poor ones! Preferably, you are a well-off person and you can bring yourself much more happiness by putting some coins inside this pair of shoes, and, let’s hide ourselves to see how the poor man will be affected by this.”

The student liked his master’s suggestion and inserted some coins in the pair of shoes belonging to that poor worker and then, he and his master, hid themselves behind the adjacent trees to see the reaction of that needy worker.

A few minutes passed by, a poor worker appeared in the scene with worn-out clothes. He has just finished shift at a nearby farm and came back to collect his pair of shoes. The poor man was astonished when he felt there was something in his shoe. He felt the same with the other shoe and found out that there was some coins in the pair of shoes.

The poor man kept staring at the coins and moved his eyes around to make sure that he was not dreaming or imagining it.

Then, he turned his eyes around but never found anyone around.

He inserted the coins into his pocket and fell to the ground on his knees looking at the sky while tears started to drop from his eyes and loudly said:

“Thank you my Lord (Allah); You knew that my wife was ill and children hungry and we cannot find even bread to satisfy our hunger; You saved me and my family from starvation and total destruction!”

The poor man kept crying and tears continued to drop from his eyes while looking toward the sky as a sign of gratitude and giving thanks to this generous divine grant from the Creator of all, Allah the Almighty.

The student was deeply affected by that scene and his eyes were filled with tears. Then the master asked him:

“Aren’t you much more happier now than if you had carried out your first suggestion hidden the poor man’s pair of shoes?!”

“I have just learnt a lesson that I will never forget the rest of my whole life.”

“Now, I have understood the meaning of an expression which I heard before but never came to properly understand, “You will be much happier when you give out than when you take!” he continued.

“Now, you should know that giving out has many various forms and types:

– When you forgive someone who wronged you while you can punish him for it is a type of giving;

– When you make du’aa for your brother while he is absent is a type of giving;

– When you find an excuse for your brother and never think bad of him is a type of giving;

– When you avoid backbiting your brother – and others – is a type of giving.

As the poor ones cannot find money to give out to others, they can carry out the above forms or types of giving which need no money to be spent. Therefore, if they carry out any of the above pieces of advice, this is going to be considered as if they have spent a lot and they will be, in return, rewarded abundantly by Allah the Almighty in this present life as well as the hereafter by His Will and Grace, Glory be His.