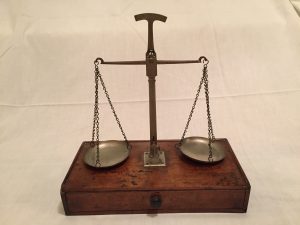 Abdullah ibn Rawahah was a leading companion of Prophet Muhammad (PBUH). He was from the rank of Ansar (the Helpers, or the local inhabitants of Madinah). Moreover, he was a scribe and poet. During the battle of Mu’tah in the 8th year after Hijrah against the forces of the Byzantine Empire, he was third in command. He was killed in the same battle.

After the battle of Khaybar in the 7th year after Hijrah against the renegade Jews, the Jews were defeated and an agreement was signed. According to the agreement, the Jews were allowed to remain on their lands and in their fortresses, while obliging them to pay half their agricultural yield to the Prophet’s state.

The Prophet (PBUH) then appointed Abdullah ibn Rawahah to estimate the agricultural produce of the Jews and to make sure that the taxes were duly paid, as per the agreement.

However, the Jews attempted to bribe Abdullah ibn Rawahah, most probably with the jewelry of their women, so that he would estimate the amount of their harvests less, and would generally go easy on them.

When he realized what the Jews were up to, Abdullah ibn Rawahah got upset and said to them: “By Allah! I have come to you from the one who is the dearest of all creation to me (Prophet Muhammad), and you are the most unpleasant creatures of Allah in my view (especially now after this evil attempt of yours). What you offer me is bribery, which is illegal. We never accept it.”

Then, immediately after that, he told them something unheard of: “However, (you can rest assured that) neither my excessive love for him (the Prophet), nor my excessive hatred for you will prevent me in the slightest from being just with you.”

In other words, Abdullah ibn Rawahah indicated to the Jews that his judgment will in no way be affected by his emotions, or any other internal or external factors. He was taught that justice must be relationships and emotions-blind. It must transcend the levels of human intrinsic and acquired variability. After all, justice, both as a concept and human way of life, is honorable and pure and must be preserved as such. It is divine. Only by promoting and practicing authentic justice, can humans and their societies be elevated to higher planes of meaning, proficiency, and experience.

Through the holy prophets, justice was presented to man as one of the greatest heavenly gifts. Man is not, and cannot be, the source of justice. God and His revelations are. Conceiving and actualizing absolute justice greatly outweigh man’s abilities. Hence, man can only be the target and conduit of divine justice. All forms of human justice are but shadows, or offshoots, of God’s justice.

When the Jews heard the words of Abdullah ibn Rawahah, they were stunned. What they just witnessed and heard was jaw-dropping stuff. People of the Book (ahl al-kitab), together with the Christians knew more about faith and virtue than others from those who did not follow the Prophet (PBUH). They were closer to the secrets of the truth-related treasures than anybody else, notwithstanding their actual relationship with the same truth.

The impact was so powerful and overwhelming that the Jews could not hide their amazement. Instantaneously, they retorted, rather intuitively: “This is the foundation upon which the heavens and earth were created (and are sustained).”

What did the Jews, in reality, hear and see, what was so spectacular about it, and what did they actually mean by their response?

The answer is twofold.

People As the Source of Good and Evil

As it is known, the Prophet (PBUH) aimed primarily to create or develop people (human capital). Everything else was secondary and in the service of people. The Prophet (PBUH) knew that it was people who would create and sustain or undermine and destroy, civilizations. It was people furthermore from whom all good and evil could originate, and to whom all the consequences, good or bad, were to return.

Man and his overall well-being topped the priorities. Everything was subjected to the stimulating and facilitating of the noble life mission and purpose of man. No surprise that the dignity of man in relation to his life, property and other human rights, is the holiest and most sanctified thing in Islam.

Justice is an instrument of preserving and elevating human honor and dignity. Since the latter is established by nobody else but Allah, the former, too, needs to be from the same metaphysical source. It needs to match the heavenly character of human distinctive qualities and to satisfy their delicate requirements.

The Jews witnessed in Abdullah ibn Rawahah an epitome and physical representation of this extraordinary worldview. The whole philosophy was transported from the world of abstract ideas to the world of palpable realities, and so effectively through the behavioral model of only one person.

Second, the Jews saw in Abdullah ibn Rawahah the true meaning of justice, which is universal and all-pervading. It permeates the whole universe (the heavens and earth), cascading down to, and manifesting itself perhaps most impressively at the plane of human relationships and their daily interactions.

What this furthermore means could be extracted from the Qur’anic chapter (surah) al-Rahman, verses 7-9.

In it, Allah firstly reveals, in verse 7, that He has raised high the firmament (the skies or heaven) and set up the measure or the balance of justice (mizan). This denotes that justice is a heavenly virtue and that the heavens have been created and are sustained on the basis of both mathematical and spiritual balance.

The word used is mizan, which means balance, measure, and scale. Thereby it is meant justice because justice is to place and keep things in their rightful places, and to allow them to function to the best of their capacities. Justice is synonymous with balance, measure, equilibrium, and perfect harmony. Yet, it is their clearest indicator. That is how the scale became a symbol of law and justice; hence, the concept of the lady of justice.

Then in verse 8, Allah says that He did what He did so that truth and justice could abound throughout His creation. The creation of the heavens set a template for man, Allah’s vicegerent on earth, putting the onus on him to comprehend, promote, sustain, and extend the same existential pattern to the spheres of not only his customary but also highest relations.

Allah says: “In order that you may not transgress due balance (mizan) (the measure of what is right and just)” (al-Rahman, 8).

It stands to reason that this is the most consequential form of what we call today sustainability and sustainable development. This principle marks the beginning and end of all authentic sustainability drives.

The same idea is further reinforced by the succeeding verse: “So establish weight with justice and fall not short in the balance (mizan)” (al-Rahman, 9).

This implies that in accordance with the heavenly mathematical and spiritual pattern, and the implications of his honorable status as the vicegerent of earth, man is bidden to be just and truthful in all his dealings and transactions: with his own self, other people, the rest of creation, and of course in his obedience to Allah’s commandments.

This is the only way for the human world to be just, balanced, harmonious, and peaceful, just as it is the case with the heavenly realm. Man is to replicate the justice, balance, and equilibrium of the heavens down on the earth.

Abdullah ibn Rawahah – like the other companions (sahabah) in their capacity as the products of the Prophet’s school and development system – was a microcosm and living example of that sophisticated paradigm. The Jews knew that and could not hide their astonishment. So, they reacted the way they did.

Finally, this extraordinary Islamic view of justice is best summed up in these two Qur’anic verses: “O you who have believed, be persistently standing firm for Allah, witnesses in justice, and do not let the hatred of a people prevent you from being just. Be just; that is nearer to righteousness. And fear Allah; indeed, Allah is acquainted with what you do” (al-Ma’idah, 8).

“O you who have believed, be persistently standing firm in justice, witnesses for Allah, even if it be against yourselves or parents and relatives. Whether one is rich or poor, Allah is more worthy of both. So follow not (personal) inclination, lest you not be just. And if you distort (your testimony) or refuse (to give it), then indeed Allah is ever, with what you do, acquainted” (al-Nisa’, 135).

Adapted with editorial adjustments from islamicity.org.