Albatross: Owner of the Longest Wings 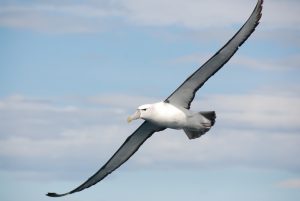 By virtue of this special system, it can fly without stopping for days, weeks, or even for months expending only a very little amount of energy.

Albatrosses are oceanic birds with very large wingspans of about 3.5 meters (11.5 feet). They spend 92% of their lives at sea and come to land only to breed. The most important characteristic of these birds is that they can fly for a very long time without stopping. They perform this difficult task by means of their style of flight.

In order to fly, it is enough for an albatross to open its wings wide against the wind. In this way, it can fly for hours without flapping its wings at all. The bird does this by extending its wings as wide as possible, and the span of its wings reaches up to 3.5 meters (11.5 feet). This is the largest wingspan among all bird species.

Making use of ascending air currents and winds, the albatross moves in their direction. It proceeds in zigzags in the wind and passes from the top of one current to another. Therefore, the albatross flies over the sea for hours without flapping its wings. Nevertheless, how can it perform this quite difficult task? What makes this bird so strong?

First, a great amount of energy is needed to keep these giant wings permanently wide open. To have a better understanding of the difficult task albatrosses carry out, let us compare albatrosses with humans. It is difficult for a man even to keep his arms open in the air for a brief time. Soon his muscles begin to ache and he lowers his arms. However, albatrosses can fly suspended in the air for hours with their wings wide open.

There is a locking system inside the wing bones of albatrosses that enables them to keep their wings open. By means of this locking system, they do not use any muscular strength. This makes flight much easier for the bird. By virtue of this special system, it can fly without stopping for days, weeks, or even for months expending only a very little amount of energy.

One merely needs to reflect for a moment to grasp that these features could not have come into existence by chance. We see the mercy and compassion of Allah upon these birds, which fly over the seas for long periods. It is Allah Who granted albatrosses all the features they need to stay alive. Allah, Who has power over all things, protects and gives albatrosses all their needs like all other creatures. Allah refers to birds in a verse in Surat Al-Nahl:

“Do they not see the birds suspended in mid-air up in the sky? Nothing holds them there except Allah. There are certainly Signs in that for people who believe.” (Al-Nahl: 79)