Allie: A Revert from Melbourne 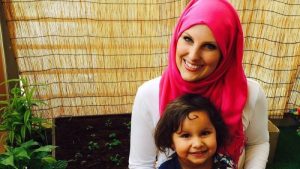 When I started to ask questions that no one could answer, I lost faith and became a self-declared atheist.

My name is Allie and I’m from Australia. Although I never felt connected to the stereotype, I’m what you’d call a true blue Aussie. I was born in Melbourne, 4 years on the Gold Coast and then Sydney.

I was born into a Catholic family that wasn’t deeply religious. We’d go to church on Sundays and celebrate Christmas and Easter. I guess you could say that religion was more about being a good person.

I went to a Catholic school and absorbed much of the bible rhetoric there. But, when I started to ask questions that no one could answer, I lost faith and became a self-declared atheist. This began around the time of my Confirmation, at 12 years old.

Growing up, I went to some of the best private schools in Melbourne and had everything I could ever want. Yet, despite that, I always felt that something was missing. As a result, I was always searching for something that could fill the gap… something better, something new, something meaningful. But, no matter what I did to end the depression, that empty feeling would never go away.

I went to university on the other side of town but wasn’t happy there. So, I changed to another university. And then another. And then finally I moved interstate to complete a business degree in the Gold Coast, famous for fun in the sun.

But, again, I felt like I was going in the wrong direction. So, I decided to volunteer overseas and thought I’d found my calling in peacekeeping and finally applied to join the Army for Officer training.

I passed the test to join the army. But, my plans were cut short when the ligament in my right foot tore and fractured whilst training for the physical examination.

I ended up in plaster for 5 months and with little else I could do, I ended up hanging out a lot with this Muslim guy from my Uni, who is now my husband. He was the one who introduced me to Islam and I directed all of my questions about the religion to him. Unlike the unanswered questions of my childhood, these questions were getting logical answers. You could say that, for the first time, religion actually made sense. I was in awe. These weren’t his answers… these were God’s.

What God had basically done was remove me from my normal life and introduce me to Islam through this guy. He never pressured me to embrace Islam. But, the more I learned, the more it made sense and the more it entered my heart. I remember the first time I heard the Quran, I don’t know what it was, but I got this overwhelming urge to cry.

We decided to get married and, although I still hadn’t embraced Islam by then, I made my shahadah a few months later and have never looked back.

I can safely say that Islam has totally changed my entire life for the better. My life is full and there is no gap for me to fill. I have a clear direction in life, which is to be good, do good and make it to paradise along with my family.

Islam has brought me closer than ever to my non-Muslim family because Islam emphasises how important it is for us to keep close family ties and be the best we can be to our parents. It has given me direction in my work by guiding me to what I love – being a mother and working on creative side projects that inspire and educate people, rather than chasing my ego and material gains. I know my everyday rights & responsibilities and this provides me with great comfort & clarity.

I didn’t really have any major concerns about converting to Islam. I just didn’t really consider anyone else in my decision because when I found the truth in Islam, it was just between me and Allah.

I was seeking the truth and, when it came my way, there was nothing left for me to do except embrace it. I did, however, take my time questioning everything to make sure it was the absolute truth and I recommend others to do the same!

There were concerns about implementing Islam in my life. Things like how I’d dress, how I’d relate to my non-Muslim family, how I’d integrate with other Muslims that come from different cultures and so on. And, in the beginning, there were some very embarrassing and awkward moments, but ultimately Allah uses these experiences to guide you.

It’s now been 4 years since I embraced Islam and I live a very happy life in Dubai with my husband and two children.

Allie’s advice to people who think about converting to Islam…

Don’t dwell on the whole “implementation” side of things. Don’t worry about the “what if” and the “how” and so on. They’ll all come later. If you find the truth in Islam, then just jump in and you can work the rest out later.

You will have challenges, but you’ll also find strength in yourself that you didn’t know was there. Allah will be there to guide and support you through your struggle and, hopefully, you’ll have new Muslim friends to support you on your journey.

Ultimately, you’ll look back at whatever challenges you faced feeling humbled that Allah didn’t test you with anything more than you could bear.