An Oasis of Faith (Special Folder) 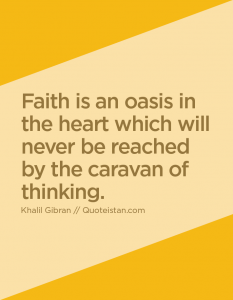 In Islam, faith stands for the belief in the Oneness of God (Allah), the Creator of all, His Messengers, His Books, His Angels, the Last Day, and the Divine Preordainment and Divine Decree. None can be considered as a true believer unless s/he has full conviction and belief in all these six articles of faith.

In this special folder, we will see some of the glimpses of faith as far as Islam/monotheism is concerned and the manifestations of having faith in Allah the Almighty and how this can help a human being lead his live peacefully and appropriately.

Join us to learn and see more…

How Can We Recharge Our Faith?

Prayer Accelerates the Treatment of the Sick

Do Muslims Worship the Ka’bah?

Reward of the Oppressed

Difficulties: True Character of the World

Belief in the Afterlife

What is Islamic Monotheism?

Belief in One God