Are Muslim Women Oppressed by the Islamic Dress Code?

The covering of Muslim women has become one of the international symbols of female oppression in feminist circles.

There are two major trends which have developed in the West over the past century. On one hand, the fashion industry has systematically unclothed women. From being fully clothed from head to toe at the turn of the century, she now wears virtually nothing when the weather permits. 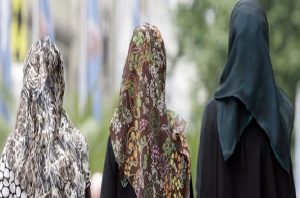 The hijab is to make the Muslim woman known in the society as a virtuous and honorable woman.

The two trends are closely interrelated. The woman in the West has become a sex-object with which to sell products thereby pumping up the sexual tension of the society. The Corvette is not sold based on its powerful engine or its special features, instead the car is displayed with a model in a bikini lying on it. Similarly, a new Gillette razor blade is not sold by giving details about its new titanium blades.

Instead, a man is shown in ads shaving with a woman’s hand with long red fingernails coiled around hold his. The subliminal message being taught is: You buy the car, you get the girl.

You buy the razor, you get the girl. Islam prescribes the covering of females for two primary reasons stated in the Qur’an.

Let them cast their outer garments over their bodies. That is best in order that they be known and not harmed. (Al-Ahzab 33:59)

The hijab is to make the Muslim woman known in the society as a virtuous and honorable woman. Her hijab makes the statement that she is not available and not interested in any advances. Many Muslim women who have emigrated to the West take of their scarves and outer garments because they claim it draws attention to themselves. If they expose their hair and dress in modest western dresses no one will look at them.

It is true that the hijab does provide a level of anonymity, as many of the woman’s physical details will be hidden. However, the intent is not to prevent men from looking. When men see a nun in her habit, fully covered like a Muslim woman in full hijab, they will turn their heads and stare at her.

Similarly, when they see a woman walking in a bikini, they will also turn their heads and stare. However, the first stare is different from the second. The first is out of curiosity, having seen something unusual, while the second is out of lust and aroused sensuality. The consequence of the second is the molestation of women on a national scale while the first causes respect.

The penalty in the Islamic state is very severe for rape in order to further guarantee protection for females. Where weapons of any type are used in the rape, the punishment is death. The death penalty has also been introduced in Philippines and it is being called for in India currently.

However, to allow women to expose themselves and then kill those who react unduly is not practical. The law should be balanced. The circumstances, which might encourage rape, should first be removed from the society, then a severe penalty may be enacted.

It may be said that even in societies where women are fully covered, they may still be approached and molested. However, if the vast majority of those who are molested are not properly covered, the principle of protection still applies. Even in the society of the Prophet, one thousand four hundred years ago, some women were molested and raped.

Some people question the imposition of hijab by the Islamic state. Is it a personal choice of women or a legal obligation? It is the responsibility of the head of every family to insure that the women of his household leave the home in a legally acceptable state of dress. The state is further responsible to prevent any women who appear in public in a state of undress in order to protect public dignity and morality.

The West has set its own limits for dress which change according to the mood of society. At one point in time, strip joints were illegal. Now many bars have topless waitresses and dancers. In most states, a woman may not appear in public topless.

However, a woman recently contested the law in Florida and won her case. Complete nudity remains public crime throughout the West, though nudist camps and nudist beaches have sprung up in different locations in Europe and America.

There are conditions which must be fulfilled for the hijab to be acceptable. a) It should be wide and loose so as to not show the shape of the woman’s body; b) it should be made of thick material which will not reveal what is underneath; c) It should not be colorful and ornamented so as to attract sexual admiration.

Where the hijab has become a cultural norm and women comply out of fear of embarrassment, it will not be worn properly. It may become transparent, or worn tight exposing the curves of the body, or it may become so ornamented as to be attractive by itself. It may be short so as to expose the dress underneath, or the face may be covered and the front of the hair exposed.

Such practices are the result of women wearing hijab for the wrong reasons. They should be educated to realize that it is for their benefit and for the benefit of the society.