Belief in the Hereafter 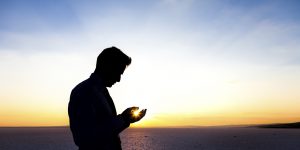 Eternal life is an enormous blessing in comparison to the very short life of the present, which is no more than a “moment”.

“The life of the world is nothing but a game and a diversion. The abode of the hereafter—that is truly Life if they only knew.” (Al-‘Ankabut: 64)

Either reward or punishment awaits man at the end of the trial that is the life of this world. Those who engage in good deeds, and have faith in God, earn the good pleasure of God, and are rewarded with an eternal Paradise. The wicked, those who deny God and transgress His limits, however, deserve Hell, where they will encounter eternal punishment.

Man never actually disappears. From the very moment we are created, our eternal life begins. That is, we have already started our eternal life. Once our trial has ended, and immediately following the moment of transition, which we call death, we will live on into eternity. Whether that time will be spent in torment or in bliss depends on one’s commitment to the Word of God, the Qur’an, and his fastidiousness in observing His limits. This entire system, the universe, the world, human beings, and everything created for human beings, have been designed for an ultimate purpose; the life in the hereafter. God informs us that man’s existence in this world is not without a purpose and that, in the hereafter, after his short life in this world, man will have to offer an account of his deeds:

“Did you suppose that We created you for amusement and that you would not return to Us?” (Al-Mu’minun: 115)

Eternal life is an enormous blessing in comparison to the very short life of the present, which is no more than a “moment”. It is truly a great mercy that, in return for following those basic inclinations that are natural to a human being—such as having faith and seeking God’s approval—, God bestows upon him the reward of eternal life in Paradise:

“As for those who believe and do right actions, We will lodge them in lofty chambers in Paradise, with rivers flowing under them, remaining in them timelessly, forever. How excellent is the reward of those who act.” (Al-‘Ankabut : 58)

“…Say, ‘The enjoyment of the world is very brief. The hereafter is better for those who have fear. You will not be wronged by so much as the smallest speck.’” (Al-Nisa’: 77)

God, Who possesses the might to create everything, can surely create the hereafter:

“Does He Who created the heavens and earth not have the power to create the same again? Yes indeed! He is the Creator, the All-Knowing.” (Ya Sin: 81)