Between Belief and Manners in Islam

Allah (Exalted be He) guides Muslims to the best of manners to purify them and keep them away from social and psychological complexities. Allah enjoins Muslims not to enter other people’s houses without their permission and welcoming, and if it is said to them go back; they should go back as it is purer for them. Men should lower their gaze and guard their chastity; as it is better for them, and they should not draw near any apparent or hidden vice. Muslim women should also lower their gaze and keep their chastity and keep themselves from prohibited men and women. 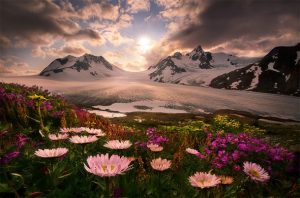 Allah guides Muslims to the best of manners to purify them and keep them away from social and psychological complexities.

Respecting privacy of homes is a moral and legal conduct. Allah made home a dwelling for family life and comfort, not a common place for anybody to enter at any time; so the Qur’an enjoins Muslims not to enter other people’s homes without taking permission and agreement, and if it is said to them go back; they should go back as it is purer for them.

O ye who believe! enter not houses other than your own, until ye have asked permission and saluted those in them.

And if you do not find any one therein, do not enter them until permission has been given you. And if it is said to you” Go back,  then go back: it is purer for you. And Allah is knowing of what you do. (An-Nur 24:27-28)

However, if the houses are not inhabited such as public houses and one has interest therein, he can enter without permission. Allah knows  what you display and what you conceal.

There is no sin on you that you enter (without taking permission) houses uninhabited (not possessed by anybody), (when) you have  any interest in them. And Allah has knowledge of what you reveal and what you conceal. (An-Nur 24:29)

Chastity of believing man is a part of ideal manners. Lowering the gaze on the part of men is considered a type of sublime good manners that decreases the chance of enticement and fascination. This manner makes the  society pure and protects its sanctity and dignity.

On the authority of Ibn Mas`ud that the Prophet (peace be upon him) said:

“O young men, whoever among you can afford it, let him get married, for it is more effective in lowering the gaze and guarding one’s chastity. And whoever cannot afford it should fast, for it will be a shield for him. (Al-Bukhaari and Muslim)

Tell the believing men to lower their gaze (from looking at forbidden things), and protect their private parts (from illegal sexual acts). That is purer for them. Verily, Allah is well-acquainted with what they do.

I was riding behind the Prophet from Muzdalifah to Mina when a Bedwan was going side by side the Prophet with his beautiful daughter riding behind him. He said “I was looking at her, then the Prophet looked at me and turned my face away from her face, then I looked again and he turned my face until I did that for the third time without ending while the Prophet was saying “Talbiyah’ until he threw the stone of `Aqabah.” And on the authority of Ibn Khuzaimeh that the Prophet said to him “My brother’s son this is a day on which he who lowers his gaze, keeps his special parts and his tongue will be forgiven.

Chastity of believing woman honors her. Allah creates Man and knows what is harmful and what is useful for him; that’s why, He orders believing woman to be aware of her chastity and keep herself from prohibited men and women and forbids her from displaying her beauty and ornaments to prohibited people.

Allah wills the Muslim society to be free from immoral relation between man and woman. Lots of women suffer a lot in societies that ignore such divine guidance and moral etiquette. To cite Rahil Brightehard, (Bayan magazine)  who declared, in a forum held in London under the name of “The reality of woman in the west” which points out the statistics that show the dangers of coeducation and mixing males and females. She mentioned these results:

1-The percentage of pregnant adolescents at mixed British schools is 75%.

2- The  percentage of pregnant adolescents at non mixed British schools is 5%.

3- The percentage of pregnant adolescents at non mixed Islamic schools is zero %.”

These statistics also highlight the positive results of the Islamic education at school as well as paternal care and ethical guidance at home.

Dr. Ahmad Muhammad Al khalidi is Researcher and translator, E L teacher and lecturer, an old member in the presentation to Islam committee.

Moderation in the Light of the Qur’an