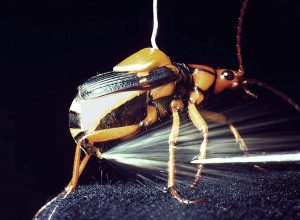 The trait that renders this insect so popular is that it uses chemical methods to protect itself from its enemies.

The bombardier beetle is an insect on which an enormous amount of research has been done. The trait that renders this insect so popular is that it uses chemical methods to protect itself from its enemies.

In moments of danger, the insect squirts hydrogen peroxide and hydroquinone stored in its body towards the enemy to protect itself. Prior to battle, specialised structures called secretory lobes make a very concentrated mixture of these two chemicals. The mixture is stored in a separate compartment called the storage chamber. This compartment is connected to a second one called the explosion chamber. The two compartments are kept separate from one another by a sphincter muscle. The moment the insect senses danger, it squeezes the muscles surrounding the storage chamber while simultaneously relaxing the sphincter muscle, and the chemical in the storage chamber is transferred to the explosion chamber. A large quantity of heat is released and a vaporisation occurs. The released vapour and the oxygen gas exert pressure on the walls of the explosion chamber and this chemical is squirted at the enemy through a channel leading outward from the beetle’s body.

It is still a great mystery to researchers how an insect can harbour inside itself a powerful system potent enough to trigger a chemical reaction that could easily cause it harm while also isolating itself from the effects of that system. It is clear that the existence and working of this system is too complicated to be attributed to the insect itself. It is still a matter of discussion how the bombardier beetle makes such a system work within its tiny body measuring about 2 cm in length, when human experts can perform it only in laboratories.

The only apparent truth here is that this insect is a concrete example completely refuting the theory of evolution, because it is impossible for this complex chemical system to have been shaped by a series of coincidental variations and passed on to future generations. Even a minor deficiency or ‘defect’ in a single piece of the system would leave the animal defenceless, so that it would soon be killed or it would cause it to blow itself up. Therefore, the only explanation is that the chemical weapon in the insect’s body had come into being with all its parts all at once and without any defect.