Can Exposure to Celebrities Reduce Prejudice? The Effect of Mohamed Salah on Islamophobic Behaviors and Attitudes 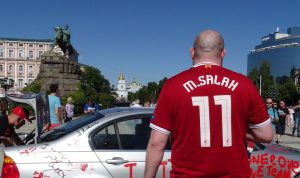 Can exposure to successful celebrities from stigmatized groups reduce prejudice toward that group at large? We exploit the sudden and phenomenal rise to fame of Liverpool F.C. soccer star Mohamed Salah, a visibly Muslim player, to answer this question.

We find that Merseyside county (home to Liverpool F.C.) experienced a 18.9% drop in hate crimes relative to a synthetic control, while no similar effect was found for other types of crime. We also find that Liverpool F.C. fans halved their rates of posting anti-Muslim tweets (a drop from 7.3% to 3.8% of tweets about Muslims) relative to fans of other top-flight English soccer clubs.

Our findings indicate that positive exposure to outgroup role models can reveal new information that humanizes the outgroup writ large.