Relation Between Fast and Ethics 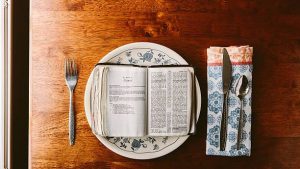 “When you fast, do not look somber as the hypocrites do, for they disfigure their faces to show others they are fasting”. (Jesus), (Matthew, 6:16)

It is important to refer to the relation of the Islamic concept of fast to ethics. Agreeing with Qur’anic teachings as regards to reference to such relation, the Bible makes little hints to it also, where it shows the nearness of a worshiper to his/her Lord when s/he fasts, “In The Book of Judith Greek ( 4:12), we read,

“Know that the Lord is responding to your prayers, if you persevere in fasting and prayer before the Lord.”

Jesus, also, abandons his companions to show-off by their fast like the Pharisees saying,

“When you fast, do not look somber as the hypocrites do, for they disfigure their faces to show others they are fasting. Truly I tell you, they have received their reward in full” (Matthew, 6-16).

Comprehensiveness of the Concept of Fast

However, the Christian concept of fast lacks in comprehensiveness in comparison to Islam which sets forth many texts talking about fast as a rite that strengthens ethics among worshipers.

The Qur’an clearly refers to the relation between them in many texts. When it legislates fast as an act of worship, it points out that fast has been prescribed on all nations and mentions as an underlying cause for it that it enables worshipers to achieve ‘Taqwah’ (Fear of God)”.The  Qur’an says,

“O you who have believed, decreed upon you is fasting as it was decreed upon those before you that you may become righteous” (2:183).

In hadith (Sunnah of Prophet Muhammad) it is reported that, the Messenger of Allah Muhammad quotes Allah, the Majestic and the Exalted, as saying,

“Every act of the son of Adam is for him except fasting. It is done for My sake, and I will give a reward for it”. (Recorded by Al-Bukhari and Muslim).

“O young men, you should get married, for it is more effective in lowering the gaze and protecting one’s chastity. Whoever cannot afford it should fast, for it will be a restraint Wija (i.e. preservation from getting into sin), for him”. (Recorded by Al-Bukhari and Muslim)

Imam al-Ghazali’s (d. 1111 CE / 505 AH), a Muslim scholar, mentions three degrees for “Fast”, saying, “It should be known that there are three degrees of fasting: ordinary, special and extra-special. Ordinary fasting means abstinence from food, drink and sexual satisfaction. Extraordinary Fasting means keeping one’s ears, eyes, tongue, hands and feet – and all other organs – free from sin. Perfect Fasting means fasting of the heart from unworthy concerns and worldly thoughts, in total disregard of everything but Allah, Great and Glorious is He.

The Bible makes hints to such relations as follows:

“People screamed and made great invocation to their Lord and humiliated their selves with fast and prayer, men and women” (Judith Book, 4:8).

Church Biblical interpretations to such texts have affected them badly. Father Dr. L. Hazboun defines the fast as “a form of repentance that reflects a regression in the relationship between man and God and others”.

In comparison to the Islamic definition of fasting, this definition remains limited. As it looks to fast as a formality, while the Qur’an indicates that fasting is an act worship, which was legislated by heavenly pre-Islamic laws. The definition, moreover, gives precedence to the spiritual side of worship on the account of the practical ritual one.

In Islam, however, we observe that the practical aspect of worship is inseparable from the spiritual one. In Islam, worship-aspect stands side by side to the practical-aspect. According to Islam, “Fast is abstinence from food, drink and sexual lust from true dawn to sunset with intention”.

The commentators of the Bible and the popes exaggerated the spiritual aspect on the account of the worship-aspect citing Jesus’ words reproaching the hypocrisy of the Pharisees in fast. In Islam, however, fast is a ritual worship, which involves within itself the moral aspects of self-discipline. Father L. Hazbun says,

‘”Fast has two aspects: Spiritual and bodily i.e. material. The bodily aspect of fast directs worshipers to disrupt deviant emotions, restrain vices, control instincts and pride of the heart and the temptations of the world to renew spirit and soul and relation to God. Therefore, fast is not only based on mouth, but on the eyes, ear, feet, hands, and other organs of the body. It is not, only, based on the change made to our bodies by food but on our hearts. One who controls lawful matters would control unlawful ones. Fast requires an effort  to defeat ourselves and get closer to God and people, ‘Watch and pray so that you will not fall into temptation. The spirit is willing, but the flesh is weak. (Matthew 26: 41)’.”.

Acts of Worship and Moderation

The modern Christian concept of fast goes against the requirements of human soul as created by God in many respects. It goes against moderation legislated by real and just God to humanity represented in moderate prophetic-messages.

True religion requires keeping true legislation as revealed by the Lord of Heaven without dilution, distortion, extremism or construing their real meanings.

In view of the reality of contemporary Christianity, we see otherwise. The church distributes the licenses of breakfast according to its own wish; certain rites are prescribed where sacred texts are absent from the scene and the public has no choice but to accept otherwise they would be expelled and excommunicated from the kingdom of God.

On the contrary, the Islamic moderate view of fast is based on the preservation of the Qur’anic sacred text with the application of its provisions as stated by directives of the Messenger of God (Allah) i.e. Prophet Muhammad – peace be upon him.

Islam maintains strict rules as regards to the interpretation of sacred texts; they should be interpreted in the light of the classical Arabic language and contexts in which the Qur’an was revealed without interference with the text or directing its meanings according to one’s own desires.

It should be noted that the tolerance and moderation of the Islamic sacred text emanate from itself; it is not extracted from another text .Muslim Jurists extract it from the text itself. God says about the blessed and moderate nation of Islam which acquired its moderation from its moderate legislation,

“And thus we have made you a just community that you will be witnesses over the people and the Messenger will be a witness over you. (2: 143).

It is makes a perfect and moderate man keeping balance between worship and material life with all its leisure, and collectiveness and individuality. This is further supported by the incident of people who came to the houses of the Prophet to ask about his worship. Anas (May Allah be pleased with him) reported:

One may perceive the absence of the facilitation-aspect in the contemporary Christian view of fast as regards to the prohibition of what God has permitted without a clear and explicit text in this regard. Enacting rites of fast, the Church, in the absence of Christian sacred texts, prohibits certain types of food, such as meat, cheese and eggs. Asking the Christians about sacred texts for such legislation, they would answer: “It is up to the appreciation of the Church!”.

Father L. Hazbun says, “Jesus drew us the main lines of fast, but he did not specify certain days of fast or hours for its beginning. He did not specify any obligations, prohibitions, or lawful rulings for fast. He, rather, prohibited sticking only to the apparent rites or formalities while abandoning spiritual aspects. He left the details of fast for the Church to decide them according to environment, various contexts and framework of faith. The Church laid the laws of fast. Doing so, it aims to ensure the minimum necessary ritual–and-ethical aspect and to unite all Christians in combating themselves to be near to God and people”.

To one’s astonishment, there are kinds of fasts about which Jesus does not anything! They are invented only by the Church after the demise of Jesus. Father L. Hazbun says, “Fast on Friday is to commemorate the day when Jesus Christ was crucified on the cross. The Catholic Church is flexible in this respect, respecting our freedom. It gives us the space to accept or not. To avoid confusion, it determines the rules for such fast as regards to age, fasting period, types of food, purposes of fast and its ways, and asks believers to apply voluntarily without coercion”.

The ecclesiastical intervention extended to all the aspects related to fast, such as the sexual relationship between man and his wife. Sexual intercourse during fast was legalized according to the permission of the father of confession! bishops said that the practice of sexual relationship between the husband and his wife during the hours of fasting does not lead to the final nullification and exit from fasting, but it is considered a “minor sin” like drinking a cup of water interrupting one’s fast!.

True religion is based on the abolition of all mediators between man and his Lord in the practice of acts of worship. The function of the messengers, and those, following him is to deliver the message of God. Bishops should not be allowed to interfere with people’s acts of worship because they do not know the internal wishes of humans.

In Islam, the Qur’an abolishes all mediators (whether human or inhuman) between God and worshipers in the communication process through the acts of worship, that is, Du’a (invocation). He (May He be glorified and exalted) says,

“And your Lord says, “Call upon Me; I will respond to you.” Indeed, those who disdain My worship will enter Hell [rendered] contemptible”. (40:60)