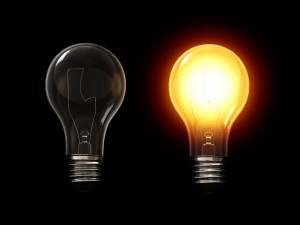 The combustion seen as giant flames in stars does not actually derive from fire.

“Allah is the Light of the heavens and the earth. The metaphor of His Light is that of a niche in which is a lamp, the lamp inside a glass, the glass like a brilliant star, lit from a blessed tree, an olive, neither of the east nor of the west, its oil all but giving off light even if no fire touches it. Light upon Light. Allah guides to His Light whoever He wills and Allah makes metaphors for mankind and Allah has knowledge of all things.” (An-Nur 24:35)

A bulb is a body which shines like a star and emits light, inside glass, and that is in full conformity with the description in the verse. Unlike oil lamps and gas lamps, light bulbs do not burn oil, and, in line with the description supplied in the verse, combustion without fire takes place inside it. As a result of the vibration among the atoms of the heat-resistant tungsten wire, the temperature inside the bulb rises to over 2,000 Centigrade. This temperature, which would melt other metals, is so high that it gives rise to a powerful, visible light. Despite that heat, however, no combustion takes place, again in line with the verse, since the bulb contains no oxygen. In addition, the filament inside the bulb closely resembles a bright star.

If we bear in mind the fact that electricity is one of the greatest discoveries in the history of the world, and that it lights just about the entire world by means of bulbs, then we may well assume that the verse may be pointing to this major discovery. (Allah knows best.)

Another explanation could be that the light is emitted as a result of the nuclear reaction in stars. Stars are bright, hot, rotating masses of gas which emit large quantities of light and heat as a result of nuclear reactions. Most newly-forming large stars begin to collapse under the weight of their own gravitational pull. That means that their centers are hotter and denser. When the matter in the center of the star is sufficiently heated-when it reaches at least 10 million degrees Centigrade-nuclear reactions begin.1 What happens inside a star is that with enormous energy (fusion), hydrogen turns into helium. Nuclear fusion takes the particles that make up hydrogen and sticks them together to make helium (1 helium atom is made from 4 hydrogen atoms). In order to make the protons and neutrons in the helium stick together, the atom gives off tremendous energy. The energy released in the process is radiated from the surface of the star as light and heat. When the hydrogen is consumed, the star then begins to burn with helium, in exactly the same way, and heavier elements are formed. These reactions continue until the mass of the star has been consumed.

However, since oxygen is not used in these reactions inside stars, the result is not ordinary combustion, such as that takes place when burning a piece of wood. The combustion seen as giant flames in stars does not actually derive from fire. Indeed, burning of just this kind is described in the verse. If one also thinks that the verse refers to a star, its fuel and combustion without fire, then one can also think that it is referring to the emission of light and mode of combustion in stars. (Allah knows best.)