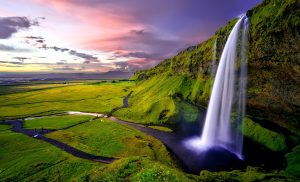 One night Prophet Muhammad appeared before me. His long beard was reddened with henna, his robes were simple but very exquisite, and an agreeable scent emanated from them.

It was on a rainy afternoon in my adolescence that I was perusing an old illustrated review. Current events mingled with fiction, and descriptions of far-off countries, varied in its pages. I turned the leaves indifferently for a while when suddenly a wood-cut arrested my eyes. The picture represented flat-roofed houses from among which here and there round cupolas rose gently into the dark sky enlivened by the crescent. The shadow of men squatting on the roof clad in fantastic robes stretched out in mysterious lines. The picture caught my imagination. It was so different from the usual European landscapes: it was an Oriental scene, somewhere in the Arabian East, where a story-teller told his gaudy tales to a burnoused audience. It was so realistic that I fancied I could hear his melodious voice as he entertained us, his Arab listeners on the roof and me, a sixteen-year-old student sitting in a soft arm-chair in Hungary. I felt an irresistible yearning to know that light which fought with the darkness in the picture. I began to learn Turkish. It soon dawned on me that the literary Turkish language contains only a small amount of Turkish words. The poetry is enriched by Persian, the prose by Arabic elements. I sought to master all the three, in order to enter that spiritual world which spread such a brilliant light on humanity.

During a summer vacation, I was lucky to travel to Bosnia, the nearest Oriental country adjacent to ours. As soon as I settled in a hotel I dashed forth to see living Muslims, whose Turkish language had only beckoned to me through its intricate Arabic script from the pages of grammar books. It was night, and in the dimly-lit streets, I soon discovered a humble cafe in which on low straw stools a couple of Bosnians enjoyed their kayf. They wore the traditional bulging trousers kept straight at the waist by a broad belt bristling with daggers. Their headgear and the unfamiliar costume lent them an air of truculence. It was with a throbbing heart that I entered the kahwekhame and timidly sat down in a distant corner. The Bosnians looked with curious eyes upon me and I suddenly remembered all the bloodcurdling stories read in fanatical books about Muslim intolerance. I noticed that they were whispering among themselves and their topic was my unexpected presence. My childish imagination flared up in horror; they surely intended to draw their daggers on the intruding `infidel’. I wished I could safely get out of this threatening environment, but I dared not budge.

In a few seconds, the waiter brought me a cup of fragrant coffee and pointed to the frightening group of men. I turned a fearful face towards them when one made a gentle salaam towards me accompanied by a friendly smile. I hesitatingly forced a smile on my trembling lips. The imagined `foes’ slowly rose and approached my little table. What now? —- My throbbing heart inquired — will they oust me? A second salaam followed and they sat around me. One of them offered me a cigarette and at its flickering light, I noticed that their martial attire hid a hospitable soul. I gathered strength and addressed them in my primitive Turkish. Is acted like a magic wand. Their faces lit up in friendliness akin to affection — instead of hostility they invited me to their homes; instead of the falsely anticipated daggers, they showered benevolence upon me. This was my first personal meeting with Muslims.

Years had come and passed in a rich variety of events, travels, and study. Each opened new vistas before my curious eyes. I crossed all the countries of Europe, studied at the University of Constantinople, admired the historic beauties of Asia Minor and Syria. I had learned Turkish, Persian and Arabic, and gained the chair of Islamic studies at the University of Budapest. All the dry and tangible knowledge that was hoarded up through centuries, all the thousands of pages of learned books I had read with eager eyes — but my soul remained thirsty. I found Ariadne’s thread in the books of learning, but I yearned for the evergreen garden of religious experience.

My brain was satiated but my soul remained thirsty. I had to divest myself of much of that learning I had gathered, in order to regain it through inner experience, ennobled in the fire of suffering, as the crude iron which the pain of sudden cold tempers into elastic steel.

One night Prophet Muhammad appeared before me. His long beard was reddened with henna, his robes were simple but very exquisite, and an agreeable scent emanated from them. His eyes glittered with a noble fire and he addressed me with a manly voice, “Why do you worry? The straight path is before you, safely spread out like the face of the earth; walk on it with trusty treads, with the strength of Faith.

“O Messenger of God”, I exclaimed in my feverish dream in Arabic, “it is easy for you, who are beyond, who have conquered all foes when heavenly admonition has started you on your path and your efforts have been crowned with glory. But I have yet to suffer, and who knows when I shall find rest?”

He looked sternly at me and then sank into thought, but after a while, he again spoke. His Arabic was so clear that every word rang like silver bells. This prophetic tongue which incorporated God’s commands now weighed upon my breast with a crushing load; ‘A lam naj`all’l-Arda mihadan — Have We not set the earth as a couch, and the mountains as stakes, and created you in pairs, and made your sleep for rest…!

“I cannot sleep.” I groaned with pain. “I cannot solve the mysteries which are covered by impenetrable veils. Help me, Muhammad, O Prophet of God! Help me!”

A fierce interrupted cry broke forth from my throat. I tossed chokingly under the burden of the nightmare — I feared the wrath of the Prophet. Then I felt as if I had dropped into the deep — and suddenly I awoke. The blood knocked in my temples, my body was bathed in sweat, and my every limb ached. A deadly silence enveloped me, and I felt very sad and lonely.

The next Friday witnessed a curious scene in the huge Juma` Masjid of Delhi. A fair-haired pale-faced stranger elbowed his way, accompanied by some elders, through the thronging crowd of believers. I wore an Indian dress, on my head a small Rampuri cap, I put on my breast the Turkish orders, presented to me by previous sultans. The believers gazed at me in astonishment and surprise. Our small party paced straight on to the pulpit, which had been surrounded by the learned, respectable elders, who received me kindly with a loud salaam. I sat down near the Minbar, (pulpit) and let my eyes gaze on the beautifully ornamented front of the mosque. In its middle arcade wild bees had built their nests and swarmed undisturbed around it.

Suddenly, the Adhan (call to prayers) was sounded and the mukabbirs, standing on different spots of the courtyard, forwarded the cry to the farthest nook of the mosque. Some four thousand men rose like soldiers at this heavenly command, rallied in close rows and said the prayer in deep devotion – I one among them. It was an exalting moment. After the Khutbah (sermon) had been preached, `Abdul Hayy took me by my hand and conducted me to the Minbar, I had to walk warily so as not to step on someone squatting on the ground. The great event had arrived. I stood at the steps of the Minbar. The huge mass of men began to stir. Thousands of turbaned heads turned into a flowery meadow, curiously murmuring towards me. Grey-bearded `ulama (Savants) encircled me and stroked me with their encouraging looks. They inspired an unusual steadfastness into me, and without any fever or fear, I slowly ascended to the seventh step of the Minbar. From above I surveyed the interminable crowd, which waved below me like a living sea. Those who stood after stretched their necks towards me, and this seemed to set the whole courtyard in motion. ‘Ma’sha Allah’ exclaimed some nearby, and warm, affectionate looks radiated from their eyes’.

‘Ayyuh al-Saadaat al-Kiram’, I started in Arabic — ‘I came from a distant land to acquire knowledge which I could not gain at home. I came to you for inspiration and you responded to the call’. I then proceeded and spoke of the task Islam had played in the world’s history, of the miracle God has wrought with His Prophet. I explained on the decline of present-day Muslims and of the means whereby they could gain ascendancy anew. It is a Muslim saying that all depends on God’s will, but the Qur’an says that ‘God betters not the condition of people unless they improve themselves’. I built my speech on this Qur’anic sentence and wound up with the praise of pious life, and the fight against wickedness.

Then I sat down. I was aroused by the magnetic trance of my speech by a loud ‘Allahu Akbar’, shouted from every nook and corner of the place. The thrill was overwhelming, and I hardly remember anything but that Aslam called me from the Minbar, took me by the arm and dragged me out of the mosque.

Men stood before me and embraced me. Many a poor suffering fellow looked with imploring eyes on me. They asked for my blessing and wanted to kiss my head. “O, God!” I exclaimed, “Don’t allow innocent souls to lift me above them! I am a worm from among the worms of the earth, a wanderer towards the light, just as powerless as the other miserable creatures. The sighs and hopes of those innocent people ashamed me as if I had stolen or cheated. What a terrible burden it must be for a statesman, in whom people confide, from whom they hope for assistance and whom they consider to be better than themselves!”

Aslam liberated me from the embraces of my new brethren, put me in a tonga and drove me home.

The next day and the following ones people flocked to congratulate me and I gathered so much warmth and spirit from their affection as will suffice me for a lifetime.

Dr. Abdul Karim Germanus is a well-known Orientalist of Hungary and is a scholar of world repute. He visited India between the wars and for some time was also associated with Tagore’s University Shanti Naketen. Later on, he came to Jamia Millie Delhi. It was here that he embraced Islam. Dr. Germanus is a linguist and an authority on Turkish language and literature and it was through oriental studies that he came to Islam. At present Dr. Abdul Karim Germanus is working as Professor and Head of the Department of Oriental and Islamic Studies at the Budapest University, Hungary.