Conversion Story of Idris from Kent 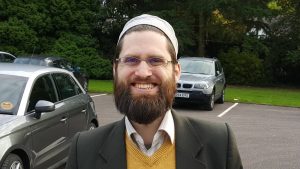 I dabbled in all kinds of things looking for identity, belonging and happiness.

I was born and raised in Kent, which is in the South East of England. I am 37 years old and I embraced Islam 18 years ago when I was 18 years old. Although my birth-name is Andrew, most people know me by my Islamic name Idris.

I was raised as a devout Christian by my mother and stepfather. Nevertheless, in my teens, I lost interest in religion and stopped going to church. As my rebelliousness led to too many confrontations with my stepfather, I eventually moved in with my father and his girlfriend who were not interested in religion either.

I dabbled in all kinds of things looking for identity, belonging and happiness. But nothing worked, I always ended up lost and unhappy. I thought the solution to this would be university—a chance to get away from family and start afresh.

I did not have the grades needed to study my subject of choice, leaving me with just Chinese, Russian or Arabic to choose from. Therefore, I chose to study Arabic since it had a module in history which interested me.

This was the first time I came across Muslims. When I first saw the bearded men and women in scarves, I thought I was at an Amish farmer’s convention!

Really, I did not know what to expect!

I remember receiving my first essay title… “Was Muhammad a greater prophet or statesman?”. I thought they were talking about Muhammad Ali, the boxer! I thought to myself: “Did that famous boxer ever claim to be a prophet?” That’s how unfamiliar Islam was to me.

Anyhow, on the surface of things, I felt like I was in for another let down. University did not meet my expectations. I was doing terribly at Arabic. I was not enjoying independence. And I was miserable all over again.

But, then a tragedy happened.

An old friend of mine ended up hanging himself.

This tragedy caused me to lose all balance in life. My view and direction were like his. And I started worrying that if I did not find some kind of direction or purpose, I might end up the same way. I reached a point where I, the person who had run away from instruction all his life, yearned for someone who could guide me.

So, I rushed to one of the Muslims on my course, an English convert, and asked him to explain Islam to me. Reflecting my own state back then, I remember that one of my main questions was whether his religion gave him peace of heart. I was sick of my life and just wanted to change and start afresh. But, given that the only exposure I had had up until then was the coverage of the Gulf War on the media, I also had concerns. “Is Saddam Hussein a Muslim?”, I asked. By Allah’s grace, my concerns were laid to rest and, soon after, he took me to the local mosque where I became Muslim.

As soon as I became Muslim, my life radically changed. I took to Islam like a fish to water, though I was overzealous in many ways. I felt like a new baby. I had entered a completely different dimension and I was thirsty to learn everything I could. Before Islam, I had been the worst student on the course. But, within a few weeks I became top of the class.

The religion gave me purpose and direction. And I soon got the opportunity to spend some time in Morocco as part of my course. So, within a few months of being Muslim, I found myself in a historic city that had hosted Islam for over a thousand years.

Its traditions, culture and beauty were overwhelming. Mentioning God was the norm. People worked to live and did not live to work. They ate together around one plate and would give one another time. And they embraced me. And, from there, my life changed completely.

Islam has helped me find balance and direction. It has given me the tools to guide myself and take the right course in all my affairs. I was a hedonistic young man before, bent on personal happiness. I justified everything I did. I had no goals and treated myself as a leaf in the wind.

But, through Islam, I was able to develop the skill of taking the needs of others into consideration. And now I am passionate about making a change in the lives of others.

Idris’ advice to anyone thinking about converting to Islam

There will never be a perfect time to convert, so do not hesitate! The most important thing is that you believe. You will gradually build on that. Realize that you will not have all the answers at first. The path to growing into your full potential is one that will be filled with mistakes. So be easy on yourself and find good, positive company, who are sympathetic.