Definition of God in Islam 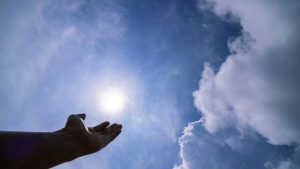 God, by definition, is the only Sovereign, Self-Existing, non-created Being to whom everything else owes its existence and completely depends on for survival and power.

God needs nothing to exist, to give Him power, or to make Him complete. God is entirely Self-Sufficient, Independent, and Perfect.

All attributes of perfection and glory belong to Him; they are permanent and inseparable from His Being and Essence. He cannot be anything but perfect, absolutely rich and free of all needs, totally powerful and capable of everything.

His Perfection, His Self-Sufficiency, His Sovereignty, and His Power are essential and inherent characteristics of His very Nature.

If He was created, limited, changeable, needy, or imperfect in any way, He would lose one of His essential divine attributes and would no longer be God.

The definition of God prohibits this. God has always existed and will always exist. He is not bound by time, space, or the laws of nature, since He cannot be subject to what He created.

Rather, He is beyond them, just as a craftsman is beyond the dimensions of his own creation. God is incomparable to any of His creations.

Having a wife, child, partner, or equal is applicable and appropriate only to creatures. God does not incarnate at all and should never be depicted. He sends messengers or prophets with the divine message. God alone gives life, causes death, and has power over all things; only God should be worshipped (directly, without any intermediary).

Anything worshipped, other than God, is an idol. Any act of worship directed to God along with or through something else is considered shirk (associating others with God in His Divinity or worship).

Allah is the all-comprehensive name of the One, True, Universal God and can never be used to designate any other being. It is absolutely unique to the Creator of existence.

In Arabic, it means ‘the One exclusively worthy of deification and worship.’ The most concise yet adequate definition of God in Islam is given in the Chapter of Al-Ikhlas 112: 1-4: “Say: He is Allah, the One God, the Self-Sufficient Master. He does not beget nor is He begotten, and nothing is equal or comparable to Him.”

Non-Definition of the Word ‘God’ in Atheism

Atheism, from the Greek word atheos (without God), is an attitude that denies or disbelieves in God’s existence; accordingly, no intelligent creator, no divine lawgiver, no ultimate judge of humanity’s actions, and nothing above or beyond this closed, natural, physical world exists.

The universe, and all its creatures and wonders, arose randomly out of matter. It did not need a creator.

Atheism offers no definition or meaning of the word ‘God.’ In the rejection of God as real, this is regarded as the job of the believers.

Atheism views anything supernatural or transcendent as inaccessible to the human mind, and therefore unknowable, unprovable, and ultimately impossible.

It believes only in empirical facts and science. Atheism demands that all issues be completely contained within the scope of human perception and reason, in ways that can be seen, tested, and measured.

It dismisses as fictitious anything beyond the limits of human experience or the material world. Generally, atheists look upon the idea of God as a product of human weakness, a moral crutch, an ancient myth, or a fantasy figure concocted by primitive minds to function as a comfort factor, a mass-controlling tool, or an attempt to explain the workings of nature.

They regard God as unnecessary or something that does not have any power over them and cannot affect their lives in any way.

Neither on the basis of logic nor science can atheism prove with certainty its main claim, the non-existence of God. Still, it places the burden of the proof on those who make the positive assertion that God exists.

Atheist positions fall into two broad categories: one category lacks compelling evidence, and the other finds the evidence illogical or contrary to God’s existence and eventually assumes that nothing worthy of the title ‘God’ exists.

Source: The article is based on the author’s book, God Or No God: Islamic Viewpoint vs. Atheist Viewpoint.