Do Not Cut Off Your Ear 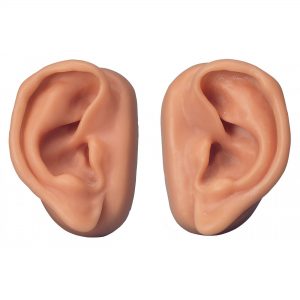 The habit continued for years and years until the whole society became one-eared!

Once upon a time, there was a king and his wife who did not beget him a Crown Prince. Therefore, he sent to all physicians in the four corners of his kingdom, seeking their help.

Allah the Almighty willed that the queen becomes pregnant at the hands of some of these physicians. The king was rejoiced beyond imagination. He spent his days and nights awaiting the advent of his long-awaited Crown Prince.

Surprisingly, when the prince was born, the queen and everyone at the palace saw that he had one ear only! That was something unexpected indeed!

The king was upset and feared that the prince would have a psychological complex that might prevent him from occupying the throne. Consequently, the king summoned all his ministers and consultants and brought the issue to discussion and deliberation.

During the heated discussion, one of the consultants stood up and said in an assured voice: “The issue is very simple my Lord! You can cut off one of the two ears of each and every newly born child in the kingdom and thus all will be the same as the Crown Prince!”

The king admired the idea which later on turned into a habit in these lands that whenever a child is born, one of his two ears is cut off. The habit continued for years and years until the whole society became one-eared!

A stranger in town

One day, a young man from abroad came to the kingdom and he had two ears – as is natural to all human beings before the start of that habit. People of the kingdom were amazed to see a human being with two ears; what a weird phenomenon?! A man with two ears! How absurd is this? How strange is this? How can a man have two ears? What is the use of the other ear? Is it really for hearing and listening or is it designed for something else?!

They started to mock the young man and make fun of him whenever they see him moving around “with” his two ears. They even started to call him, Two-ear guy or the man with two ears!

Eventually, the young man lost his patience and endurance and was determined to cut off his own ear just to be one of them and to look like them. Thus, he may be saved from their constant and incessant mockery and making fun of him.

The question that begs answering now is: Can a whole community be disabled?!

The answer is: Yes, it can!

This happened thousands of times throughout the history of mankind. Allah the Almighty sent messengers and prophets to guide humans to the right path and correct their march towards Him, Glory be His, and to rectify the society’s ideological, behavioral and religious disabilities.

The community of Prophet Ibrahim (Abraham) was disabled with shirk (disbelief) and Ibrahim was a stranger to that society because he was not involved in their disability. Instead, he was faithful to Allah the One and Only God, the Creator of the universe and everything be it known or unknown.

The society of Prophet Lut was disabled with sodomy (a form of homosexuality) and Lut was a stranger among them. This is because he was not practicing their disability and was a chaste person. He rejected all signs of perversion and going away from the fitrah (natural disposition) with which Allah the Almighty created all human beings.

In a similar vein, the society of Prophet Shu`aib was disabled with practicing usury and fraud. However, Prophet Shu`aib himself was a stranger among them as he did not practice their disability. He was a just and fair person who does not eat others’ property or money without any rightful or legal justification.

In Islam, we have a juristic maxim that says, “People’s unanimous agreement on something illegal does not make it legal!”

Do not cut off your ear!

If you are certain that you are right and doing the right thing, do not waive your right just to please others and/or satisfy them.

If they do not find it embarrassing to stick to their wrong, do not you ever feel ashamed of what you believe to be right.

Always remember that not all people are rational, knowing, or thankful.

“And if you obey most of those on earth, they will mislead you far away from Allah’s Path. They follow nothing but conjectures, and they do nothing but lie.” (Al-An`am 6: 116)

“And We have not sent you except comprehensively to mankind as a bringer of good tidings and a warner. But most of the people do not know.” (Saba’ 34: 28)