Engineering in the Cobweb 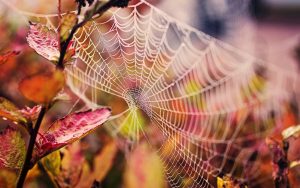 How does a spider know such an admirable technique and apply it so well? Moreover, every spider for millions of years has spun its web applying the same technique.

Have you ever noticed the shapes of spider webs? Did you know that spiders produce their thread themselves and that this thread has some amazing characteristics? On the other hand, have you heard that the techniques used by garden spiders to spin a web are the same as those used by civil engineers today?

A spider needs two separate places in order to spin its web. Webs are generally spun in a corner where two walls join or between two branches. However, some spiders are so skillful that they spin their webs using a single surface. How a spider spins its web is spectacular. Now try to visualize what we will tell you here.

A spider first finds a flexible branch that is long enough to spin its web. It firmly fastens a thread to the end of the branch. Walking down the branch, it continues to secrete thread. Once it covers a certain distance, it stops and ceases to secrete. It pulls the thread it has secreted until the branch is bent like a bow. The spider sticks the other end of the thread, which is now as straight as a string, firmly to that point. Then it starts to spin its web inside this bow.

Now consider what you would do if you were to stretch a string two and a half meters long between two walls that are two meters apart from each other. While you are trying to find out how, let us explain how a species of garden spider has solved this problem.

Garden spiders sometimes spin their web between two distant branches. Since such webs are quite large, they are ideal for catching prey. Nevertheless, their large size results in a gradual decrease in the tautness of the web, which means a decrease in the ability to catch prey. Therefore, spiders need a solution to this. You might have thought that the spider would spin a new web once the web is not taut enough anymore. Instead of replacing the web, the spider does something amazing: It secretes a thread from the center of the web down to the ground, and fixes a small stone on to that end of the thread that is close to ground. Returning to the web and pulling the thread, it lifts the stone. Then it fastens the thread, at one end of which the stone swings in the air, once again on the center of the web. Consequently, the web is tightened up again as the weight of the stone hanging from the web stretches it down. 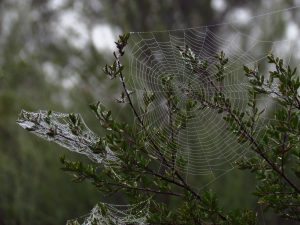 You would probably not come up with such a solution, and neither would many people with no knowledge of construction techniques. Spiders, however, know and apply this technique. How does a spider know such an admirable technique and apply it so well? Moreover, every spider for millions of years has spun its web applying the same technique. There has to be a “Power” Who inspires the spider to use this technique, because the power to do it does not belong to the spider itself. This power belongs to the Almighty Allah, Possessor of everything, Who guides and inspires all living creatures with what they need to do.