Facts about the Unique Eloquence of the Qur’an 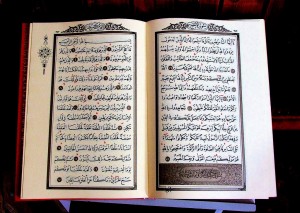 The reason the Qur’an has showed matchless eloquence in substance and style is because it is the absolute truth; it is from the Speech of God.

The first audiences of the Qur’an were the desert-dwellers of Arabia, who were proud of their language skills. Their material possessions were meager, but their language was far in advance of their culture. They earned their livelihood by trading and took many trips abroad to buy and sell goods. Their long journeys across the desert provided them the time to ponder about nature, and the order of the nature of things. They were very meticulous in their choice of words, and very specific in their speech. They adored oratory and diction, and effective communication. They were skillful in the articulation of finer thoughts, and quite adroit in their expression of ideas. Words were their wares, and eloquence was their fetish and forte. Communicating finer thoughts in the finest form was their obsession. Composing poetry and prose was their passion. They vied each other in their ability to be fluent and eloquent. They produced elegant literature of high quality, even though the subjects they chose were mostly petty and profane. They squandered their skills in embellishing the tales of their tryst, their amorous exploits and adventures, the exaggerated and boastful accounts of their valor in warfare, and the virtues of their wine and women. Their written literature was scanty, but they had a prolific memory and committed thousands of quotes, anecdotes and poems to memory. Their literature was passed along to subsequent generations by oral traditions. So proud were they of their diction and eloquence that they declared themselves to be the masters of the language, and others to be deprived of the faculty of speech. Compared to theirs, other languages were merely the crude communications of inarticulate mute men. They referred to all non-Arabs as ‘`Ajams’, those suffering from a speech impediment.

When the Arabs first heard the Qur’an, they were awe-struck by its eloquence and listened in amazement. Never before in their life had they heard such a stunning and stately sermon. Their instincts convinced them that such a noble and impressive discourse could only be a divine diction, not a human creation. It was far more sublime and solemn than all their literature put together. The Qur’an proclaimed that it was not a man-made composition, and challenged its audience to present any composition that matches its style and elegance. It declared that humans would fail to produce a single composition to match its caliber, even if they joined hands and converged and coordinated their efforts. It threw the gauntlet,

And if you are in doubt about what We have sent down upon Our slave [Muhammad], then produce a Surah the like thereof and call upon your witnesses other than Allah, if you should be truthful. (Al-Baqarah 2:23)

The expert composers of Arabia heard the dare, but could not come up with an answer. Compared to the Qur’an their literary endeavors appeared clumsy and childish. They felt like they were inexperienced novices. The distinguished and prolific poets seemed immature. The enthusiastic orators found themselves at a loss for words. They were humbled and humiliated by the words of the Qur’an. The masters of the Arabic language failed to find any flaw or lapse in the language of the Qur’an. They acknowledged defeat and expressed their inability to match it. Many were so mesmerized by its message that they embraced Islam right there and then. The internal evidence of the Qur’an is enough to dispel doubts. When one reads it, it becomes clear that no man could have written it.

Man is the subject of the Qur’an. It narrates the story of man as an integral whole, and it describes all the stages of man’s journey to his ultimate destination, his birth, life, death, resurrection, the judgment of his deeds and depending upon the judgment, heaven or hell. In this temporal and physical world, the observation and experience of man is restricted to his birth, the trials and tribulations of his life and his death. His five senses do not enable him to perceive an existence beyond the confines of this physical world. The eyes do not see light emanating from the other world, and the ears do not detect sounds from the other side. The hands cannot feel, the nose cannot smell, and the tongue cannot taste anything that is not of this world. The mind therefore fails to perceive the presence of the world beyond.

The great beyond lies past the borders of death. Resurrection, the judgment of deeds, and heaven and hell are events scheduled to take place there. Fluently and poignantly, and with an aura of confidence, the Qur’an describes these events in detail. It narrates with the knowledge of certainty. It discusses the events of the other world with the same ease and eloquence as the events of this world. Ever since it was first revealed its diction and eloquence remain unsurpassed, not only in Arabic but also in all languages of the world. The challenge still stands. Man will never be able to match its literary quality.

The difference between the Qur’an and the work of the poets, writers and philosophers is not only that of degree or quality, but also that of character and class. It did not stoop down to the earthy model of distortion and dishonesty. Rather, it aggrandized and sanitized the standards of literature, and introduced it to a new height. It imposed a tougher requirement for literary standard and demanded absolute honesty and accuracy. It refused to espouse fiction and the art of fictionalizing facts, and spurned exaggeration. It did not win by using the ways and means of the other literary works.

The literary giants know the rules of grammar and diction. Yet, they cannot comply with the rule laid down by the Qur’an. They are handicapped because their expertise is of no avail without falsehood and fiction. If exaggeration was to be edited out of their work, they would not be left with much of their work. They cannot imagine poetry without a degree of lies and embellishment. Thus the Qur’an unfettered the facts and liberated the truth from the clutches of its captors – the poets, the writers and the philosophers of the past, present and the future. It exposed their craftiness. When it comes to matters pertaining to this world, they do know the facts but do not always choose to be honest and accurate. However, when it comes to matters past the grave, they are actually the charlatans relying on guesses and conjectures.

And most of them follow not except assumption. Indeed, assumption avails not against the truth at all. Indeed, Allah is Knowing of what they do. (Yunus 10:36)

And if you obey most of those upon the earth, they will mislead you from the way of Allah. They follow not except assumption, and they are not but falsifying. (Al-An`am 6:116)

The Qur’an defied the accepted norms of literature and achieved eloquence and eminence without resorting to exaggeration of any sort. Because of that, every literary classic created in any period of history and in any language of the world, would fall in a class lower than that of the Qur’an. It has a unique character all its own. It lays down facts plainly, and meticulously adheres to accurate narration. Even when it quotes a parable, the comparison is never misleading and it does not twist or bend the truth. The words and phrases it uses bring out the unadulterated truth. It is sworn to tell nothing but the truth. Precision is its priority, and all of its text can be accepted literally. Scientific treatise should be that exact. Its adherence to accuracy when it comes to matters pertaining to this world infuses faith and confidence into its believers. They become convinced that the events scheduled to occur beyond death are also depicted with the same accuracy and precision, and without exaggeration. The reason the Qur’an has remained matchless in substance and style is because it is the absolute truth. About itself, it says:

These are the verses of Allah which We recite to you, [O Muhammad], in truth. And indeed, you are from among the messengers. (Al-Baqarah 2:252)

He has sent down upon you, [O Muhammad], the Book in truth, confirming what was before it. And He revealed the Torah and the Gospel. (Aal-`Imran 3:3)

Source: Taken with modifications from islamreligion.com