Reflections on the Story of the People of `Ad 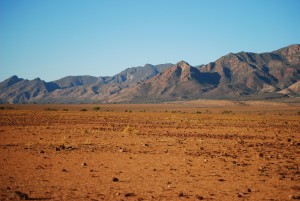 The people of `Ad were well advanced in industry, using machinery to carve positions for their palaces which they built on mountains…

The Prophet Hud’s people lived in al-Ahqaf, an area of extensive sand dunes not far from Hadhramaut and in the direction of Yemen. They lived sometime after Noah (peace and blessings be upon him), and were one of the communities that deviated from the right way sometime after the flood that punished Noah’s people.

Hud’s story was told in detail in Surah 7 (Al-a`raf), and Surah 11 (Hud). It is also mentioned in Surah 23 (Al-Mu’minun) without mentioning the names of Hud or his community.

The story here is summed up between Hud’s address to his community that encouraged them to believe in God’s oneness and the end they faced as God’s punishment befell them.

The story of Hud and his people has the same beginning as Noah’s story (mentioned previously in Surat Ash-Shu`raa’):

It is the same message given by every messenger of God: it is a call to believe in God alone and to fear Him and obey His messenger. This is coupled with a declaration disclaiming any interest in worldly luxuries or position the people may have to offer. This puts things in the right perspective. The messenger seeks nothing from them, but instead, he looks to God for his reward.

Hud (peace and blessings be upon him) follows this declaration by examining their own particular conditions and behavior. He criticizes the fact that they build lofty buildings to demonstrate their ability, taking pride in their wealth. He denounces their arrogance which results from their material power and the resources that enable them to use different forces and means, in total disregard of God, oblivious to the fact of their accountability to Him:

“Do you build a landmark on every high place, in a vain endeavor, and make for yourselves strong structures, hoping to be immortal?” (Ash-Shu`raa’ 26: 128-129)

It seems that they used to build on high places so as to make such structures appear from a distance as grand landmarks. They did so to emphasize their superiority and great ability. Hence the Qur’an describes it as a ‘vain endeavor’. Had it been intended as a landmark or a sign to show direction, it would not have been described as such. The Qur’anic statement, then, implies the need to direct one’s resources and abilities to what is of benefit, not merely to show off and demonstrate abilities and wealth.

It also appears that the people of `Ad were well advanced in industry, using machinery to carve positions for their palaces which they built on mountains. This is indicated in Hud’s saying to them:

It even occurred to them that such strong structures built with the use of heavy machinery could spare their lives, and protect them from severe atmospheric conditions as also from enemy attack.

They have further practices that are strongly criticized by Hud: “When you exercise your power, you do so like cruel tyrants.” (Ash-Shu`raa’ 26: 130) They were mighty, hard, tyrannical and would deal with others using utmost cruelty, like many others who rely on material power.

Hud, therefore, reminds them that they must fear God and obey His messenger. This would be sure to redress their cruelty and put a stop to their arrogance: “So, fear God and pay heed to me.” (Ash-Shu`raa’ 26: 131)

He further reminds them of God’s grace, as it is He who has favored them with His blessings which they use arrogantly as also to oppress others. They should have remembered God’s favors and given thanks for them. They should also bear in mind that the One who has granted them such favors can easily take them back, or punish them for putting His favors to wrong use:

Hud’s reminder mentions first the One who granted them such blessings before enumerating them. He {has provided you with all that you know.} It is all a gift for you, and you know it well as you benefit by it in your lives.

He then gives further details: “He has provided you with cattle and children, and gardens and springs.” (Ash-Shu`raa’ 26: 133-134)

These were the best favors that they could have enjoyed during that period of time. They are indeed a great favor at any time. He then warns them against punishment that may befall them on an awesome day. His warning expresses his fear for their end, because he is one of them, their brother, and he wants to spare them the hardship of that day which is certain to come.

But his reminders and warnings do not touch their hardened hearts. They stubbornly refuse to mend their ways:

This is a derogatory way of speaking, one which expresses their carelessness for whatever he might say. They add a clear indication that they are hardened in their ways, relying totally on what they have inherited from previous generations:

Their only argument in defense of all the practices Hud has criticized them for is that they are following earlier generations, towing their line. They then deny the possibility of being punished for following in their ancestors’ footsteps: “Never are we going to be punished.” (Ash-Shu`raa’ 26: 138)

The Surah does not mention here any of the arguments that took place between them and Hud. It proceeds straight to the end: “Thus they denied him. So We destroyed them.” (Ash-Shu`raa’ 26: 139)

These two short sentences, expressed in the original Arabic text by only two words, fakadhdhabuhu fa’ahlaknahum, spell out the end of the mighty people of `Ad and their great symbols of power. Nothing is left of their luxuries, cattle, children, gardens, and springs.

How many a community has followed the same practices as the `Ad people, moving further away from God with every new aspect of civilization they have achieved. They always think that man can be independent of God. They try to produce weapons to destroy others while ensuring their own security. Yet it may be only a day or a night and such a community finds itself subjected to God’s punishment:

Taken with slight modifications from the author’s Book: In the shade of the Qur’an

Sayyid Qutb (1906-1966) was a prominent and influential Muslim intellectual and writer. He wrote many books about Islam and its distinctive features as a comprehensive way of life. Among his most important works is his exegesis of the Qur’an In the Shade of the Qur’an, which was widely welcomed among Muslims and established itself as one of the best references in Qur’an exegesis.