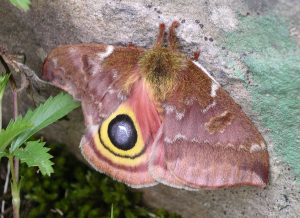 Such a convincing pattern can be the result only of sublime Creation, not of coincidences.

There are some wonderful and unimaginably interesting defence methods in the animal world. One of these is false eyes. With such false eyes, various butterflies, caterpillars and fish species convince their enemies that they are “dangerous”.

The butterflies open their wings as soon as they sense danger and display a pair of eyes on each of their wings which appear quite threatening to their enemies.

Let us take our time and think: can these extremely convincing eyes be the result of a coincidence? How does the butterfly know that a pair of scary eyes appears when it opens its wings and that the sight of them would frighten its enemy? Has the butterfly happened to see the pattern on its wings and decided that this pattern was frightening and that it could use it in a moment of danger?

Such a convincing pattern can be the result only of sublime Creation, not of coincidences. Moreover, it is by no means possible to think that the butterfly is aware of the patterns on its wings and discovered this as a defence tactic by itself. It is obvious that Allah, Who created the butterfly, bestowed on its body such a pattern and inspired in the animal the instinct to use it in moments of danger.