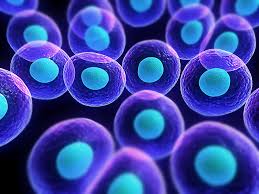 Sometimes hundreds of protein molecules are produced in just a second in a cell. The rapid and flawless lining up side-by-side of tens, hundreds or thousands of amino acids can only be achieved with a knowledge and power that surpasses these very small structures.

An important characteristic of animate structures in the micro-pages of nature unseen by the naked eye is being able to fit intricate and convoluted broad surfaces into a small area or volume.

Fitting in surfaces with very broad unit of volume is seen as wonderful architecture in the cell. Endoplasmic Reticulum (ER), which resembles a net comprised of very fine tubes around the nucleus, is the organ with the most surface area in the cell. For example, in liver cells the surface area of ER is 30-40 times that of the cell. Why is this surface area so large? What could the wisdom behind it be? Tiny endoplasmic canals play a role in inner cell transportation and distribution of matter.

ER is the organized industry district in the cell. Most of the factories of molecules produced by chemical reactions are found here. ER is the production spot in the cells of proteins and hormones. Consequently, a broad surface area is very necessary and important. Different degrees (pH) of acid are necessary for each reaction. However, because the acid necessary for one reaction can negatively affect the other reactions, thousands of opposite, intricate and different reactions take place. For this reason, membrane surface areas need to be wide.

Sometimes hundreds of protein molecules are produced in just a second in a cell. The rapid and flawless lining up side-by-side of tens, hundreds or thousands of amino acids can only be achieved with a knowledge and power that surpasses these very small structures.

Wrapping the inside of the cell like a web and forming a buffer against mechanical effects, ER is responsible for establishing the flexibility and soundness of the cell.

In muscle cells, ER takes the name Sarcoplasmic Reticulum (SR), which has a very important duty in the contraction of muscles. The size of the surface area of SR in the muscles of the structural frame is proportionate to the speed of muscle contraction.

Consequently, there is more SR in muscle cells where there is rapid contraction. SR also serves as a calcium depot in muscle cells. Normally calcium is a deadly poison for the cell, and for this reason it is kept out of the cell. The concentration of calcium outside the cell is 10,000 times more than it is inside the cell.

However, SR stores calcium in the cell in its own body. Thus, it both prevents the cell from being harmed and it provides the necessary calcium for contraction. ER has the duty of eliminating the poison in the liver cells from the body by means of gall.

For example, jaundice-causing bilirubin is a deadly poison for the brain especially in newborn babies. If jaundice is not treated, motor loss (paralysis) and intelligence loss can result from brain damage.

Bilirubin and glucuronic acid combine by means of some enzymes on the surface of ER in the liver and are thrown into the gall bladder. In this way ER plays an important role in making foreign matter harmless and in reducing the side effects of medications to a minimum.

Babies’ sensitivity to some medications during the first three months of life is due to ER’s not yet being developed enough to eliminate their harmful effects. If it is taken into consideration that all of these mechanisms exist in human, animal and plant cells, it can be clearly seen that a broad and complex structure in such a small volume and its many functions can only have been placed there by the All-Powerful whose knowledge, wisdom, artistry, will and power permeate every moment and every spot.

Hilmi Celaloglu is a freelance writer from Turkey with a degree in biology.