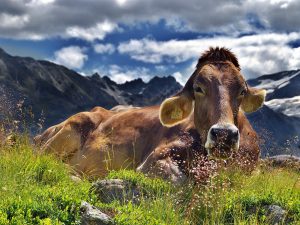 Grass-fed meat and dairy are a bit of a misnomer. All cattle eat grass as they grow, but truly grass-finished ones continue eating just forage for their entire lives. The vast majority of cattle are grain-finished, which means they are plumped up in a feedlot on grain for a few months before heading to the slaughterhouse. Grain-finished cattle can be slaughtered faster because the added food fattens them up quicker. The grazers take some more time, up to a year, to gain enough weight. When confined in a limited grazing area, they feed on grass very quickly and sometimes take off the roots which make it difficult for plant life to continue their cycle. You can compare their effectiveness in doing so with a a string trimmer tool that is used on random patches on the lawn.

Although the United States Department of Agriculture (USDA) and the American Grassfed Association provide guidelines and labeling for grass-fed meat, it comes down to the consumer to be knowledgeable about what those labels mean and what they’re getting when they seek cattle that has only had grass its entire life. The Association’s label means that the animals are fed only grass and forage from weaning to harvest, are raised on pastures and not confined to feedlots, are not treated with antibiotics and hormones, and are local to the United States.

“It’s a complex food world out there,” explains Heather Darby, professor of agronomy at the University of Vermont. There are continually changing aspects of food that become more important to consumers over time, and keeping up with these trends can become confusing. With grass-fed, she’s found that people often start with a belief system that this technique is better for the animal and the environment. They then realize the health benefits associated with it.

For consumers who are intent on humane techniques for raising and slaughtering animals, grass-fed cattle are a tantalizing option. Although not all are out in open pastures, for many it means that they are not confined to feedlots.

Khalid Latif, chaplain at New York University and Imam of the Islamic Center there, sees this as an advantage. He and his co-founders started Honest Chops, a company that comprises of a butchery and hamburger restaurant, to provide a revenue stream for social services. During this quest to open a new business, they conducted their own research of available products.

He and his co-founders decided that if they were going to take on this new project, they wanted to ensure that their meat was organic and fresh. They also sell grass-fed products because they didn’t want to contribute to the unhealthy practices they had seen in other locations. For him and Honest Chops, the importance was that the animals were living out their lives as he believes they are meant to: they eat grass, walk around, and are not confined.

“So much of our spirituality is attached to what we consume,” he adds. “So from start to finish, we are ensuring those needs are met and that transparency is there.”

Islamic scholar Rachid Belbachir clarifies that the concept of grass-fed doesn’t fall into the category of allowed or forbidden foods. Because grain is a halal food for Muslims, cattle being fed grain is not a religious issue. He does agree that animals living in an open area before they are slaughtered is preferred. “You don’t kill an animal next to another. You feed them and water them. They’re not confined like they’re in jail,” he expands. However, both grain-fed and grass-fed cattle can fit this criteria.

Of course, ethical considerations also come with a price. Mian Riaz, PhD, professor in the food diversity innovation program at Texas A&M University, explains that these grass-fed animals take a longer time to grow bigger on just their natural meals. There’s also price for more land for grazing, since they aren’t confined to a small area. For that reason, “I know definitely the price is two to three times more expensive.”

Many are willing to pay the extra price for grass-fed meat because studies have been conducted to show that it is more environmentally sound. The claim is that well-managed foraging can sequester carbon by absorbing it back into the soil. “If we graze properly, we can actually sequester tons of carbon per acre while producing clean protein,” explains Ridge Shinn, founder and CEO of Big Picture Beef. If cattle are allowed to graze for short periods of time in one area and not take out grass by its roots, the plant life will use the carbon left by the animals to regrow instead of allowing it to be released back into the air. This cycle continues as the cattle are moved around to several pastures and then return once there is new grass to eat.

A 2018 study by researchers at Michigan State University supports this idea of grass-fed animals contributing to a better environment. However, this study only looked in one region of the country and at adaptive multi-paddock grazing. That means that there are more stringent requirements most farmers don’t currently meet that could eventually have a net neutral effect on carbon emissions. These requirements include having cattle moving to different lots instead of continuous grazing in one, which means much more land and more money spent by farmers.

However, Crista Derry, research technician at the Michigan State University Lake City Research Center, contends that if farmers are in areas where that land is already available, it’s a good cost-saving method because the only other material needed to grow the grass is natural, such as sunlight and rain.

Shinn has been in the grass-fed arena for twenty years and advocates for it as an advantage both for the beef and farmers because it’s a relatively untapped market in the United States.

As an added benefit to the environmental and humane concerns, studies have also shown that grass-finished meat has more of the healthy omega-3 fats than grain-fed meat. According to researchers at Berkeley Wellness, a collaboration with the University of California, Berkeley’s school of public health, “The beef produced is leaner than conventional beef, yet its fat tends to have a higher proportion of omega-3 fatty acids. In contrast, when cattle are fed grains at the end of their lives, their omega-3 stores rapidly decline.” However, the organization also clarifies that amount is paltry when compared to salmon or other fish, so it’s not a cure-all when it comes to trying to eat healthier. For most people, it’s an add-on to the environmental and humane concerns.

There can be a learning curve when it comes to taste of grass-fed options, as well. Those used to grain-fed meat may have to adjust palates and ways of cooking because the final product is not as fatty. The taste from grain-finished cuts comes from the marbled fat that the animals put on so quickly. Grass-fed beef can also cook faster and get drier. Shinn spent plenty of time finding the right kind of livestock to ensure that his end-products taste great. “It’s been a steep learning curve, but we’ve been able to find the cattle that perform on grass and make a tasty, tender piece of meat,” he says.

For Derry and Darby, the bottom line for consumers is to try to get as much information as possible on potential meat purchases from a farmer or vendor.

“I think that if people are concerned about what’s going into their meat or how it’s raised, going to a farmer’s market and finding someone who raises those animals is a really good option,” Derry says. This way, consumers can ask direct questions about what the animal has been eating and the grazing practices at the farm to help them make decisions about the qualities most important to them when purchasing meat.

Nadia Malik holds a degree in journalism and is a former reporter for a Chicago-area newspaper. She has written for websites and publications and has also worked for several non-profit organizations. She is currently in a graduate program at the University of Pennsylvania, studying social work and nonprofit leadership.

Reprinted from the Spring 2019 issue of Halal Consumer© magazine.