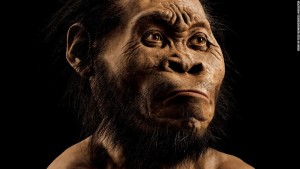 The Homo Naledi hand is totally different from the human hand. Its curved finger bones and other ape-like features show that it belongs to an ape that leapt from branch to branch.

Numerous reports, claiming that a fossil known as Homo Naledi represents an ancestor of man, have been appearing in the media in recent weeks. The reconstruction pictures and stories written were all intended to give the impression that this represented a semi-human, semi-ape entity. But what is the real truth of this fossil described as a hominid, and do those claims have any scientific foundation?

In this article, we shall be looking at how Darwinists use ape bones as a propaganda tool.

The Unending Problem of the ‘Forebear’ In the Myth of Evolution

Homo Naledi is a skeleton assembled using certain bones selected from 1,500 bones discovered in a scattered state in the depths of a cave complex in South Africa. Bones large and small thought to belong to 15 separate individuals, adults and children, were set out in what was thought to be a logical sequence. The result was a mosaic life form with features between those of humans and those of apes. Although not one entire skull was discovered, the bones were put on public show in a collage in which none of the individual bones were attached to one another.

The brain volume of such a skull has been calculated at 465-560 cc. That is slightly larger than an orange and is about the size of a chimpanzee brain. The lower part of the face in the reconstructed skull was curved, similar to that of chimpanzees. There was no protruding nasal bone such as is typically found in humans. Nonetheless, Lee Berger, in charge of the research, suggested that this skull represents a semi-human semi-ape, a so-called ancestor of man, and supposedly a ‘new’ species.

As Lee Berger, head of the research team, admits, these fossils do not match any known human race. That is what led Darwinist scientists to immediately refer to these remains as a ‘new species.’ Berger maintains that this supposed new species is a hominid (homo) species that fills the gap between Australopithecus and modern man. However, a close examination of the bones makes it clear that this interpretation is a biased and prejudiced one.

This assembled skeleton resembles chimpanzees in all respects. The shoulder joints and curved fingers are identical to those of monkeys that dangle from branches. The wide hip bones and the chest cavity that widens from the top down are also unique to Australopithecus apes. Although the foot bones are alleged to resemble those of human beings, even the research team admits that they have a low arch and face in a different direction.

Although Darwinists regard Australopithecus afarensis as a first ancestor on the supposed evolutionary family tree, its thumbs are longer than those of modern chimpanzees and monkeys. This flies in the face of the theory of evolution. The Homo Naledi thumb is slightly longer than that of Australopithecus afarensis. That also goes against the theory of evolution. Not only does it not resemble the human thumb, but it is also very different to that of species described as hominid on the mythical evolutionary family tree.

The Homo Naledi hand is totally different from the human hand. Its curved finger bones and other ape-like features show that it belongs to an ape that leapt from branch to branch. It is impossible for such a hand to grasp and use any tool. In addition, no tools or items belonging to human culture were found in the cave where the bones were discovered.

The Problem of Homo Naledi’s Age

Various methods for estimating the age of a living thing can be used in archeology. Yet no steps have as yet been taken to determine the age of the bones in the Dinaledi chamber. The account in question is therefore based, not on scientific evidence, but on the prejudice that various human-like entities may have existed during the imaginary evolutionary process. In Berger’s opinion, these bones are very compatible with an age of 2 million to 2.5 million years. In his view, and that of National Geographic, a financial backer of the project, ‘if this age is correct’ then Homo Naledi is the ancestor of entities described as hominid. Clearly such speculation is all based on ideological prejudice, not on scientific data. Even Carbon-14 dating would by itself be enough to undermine this fantasy.

The Intoxication of Imagination

According to Berger’s fantastical account, Homo Naledi buried its dead in caves. And this cave was also a graveyard, and the bones belonged to those dead members. However, this is no more than a dream its authors wish were true. This claim derives from the materialist idea that animals gradually turned into humans and gradually developed moral behaviors. The fact is, however, that burial underground or making cemeteries are values taught to humans with consciousness and awareness through the divine faiths.

The idea that an animal could pass along dark and narrow tunnels and carry its dead to another chamber in the very depths of this cave complex after a series of dangerous and highly acrobatic maneuvers does not reflect reality.er

There may be a far more logical explanation for the presence of those bones in that chamber. For example, these apes may have been carried there by floodwater. Alternatively, there may once have been another entrance to the chamber, and that the animals in question were then trapped there when the entrance was blocked by some natural disaster.

Fabricating such fantastical tales by saying ‘We are researching our past’ and then believing them just shows the impasse in which Darwinists find themselves.

Another Extinct Species of Ape

There is clearly no scientific basis to this tale written in the light of Darwinist prejudices. Although Lee Berger describes Homo Naledi as an ‘extraordinary intermediate species,’ and despite all the reports along those lines in the media, the research findings reveal a fossil that with all its characteristics belongs to a type of ape.

Even if we were to admit the accuracy of the speculative reconstructions produced by scientists, that would not alter the outcome. These remains, with their small brain volume, curved face, jaw and shoulders, curved fingers and toes, rib cage and hip bones, belong to an extinct species of an ape of  Australopithecus.

Taken with slight editorial adjustments from the author’s works.