How Carbon is Formed in Huge Stars 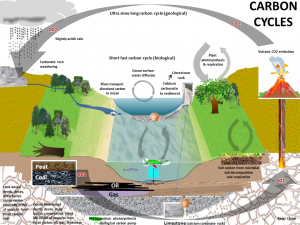 How Carbon is Formed in Huge Stars

Carbon, the “element of life,” is produced only by miraculous nuclear reactions taking place in the core of huge stars. If there were no such reactions, there would not be carbon—or any other elements—in the universe and therefore, no life. We say “miraculous” because these transformations cannot take place under normal conditions, but require a combination of the most improbable factors.

Carbon atoms are produced in the core of huge stars by a two-tier process. First, two helium atoms fuse to produce a transitional element with four protons and four neutrons called beryllium. When a third helium atom fuses with beryllium, they produce a carbon atom with six protons and neutrons.

The beryllium atom produced in the first stage of this process is different from the beryllium atoms found on Earth, since the element beryllium listed in our periodic table boasts one additional neutron. The unusual beryllium isotope found in red giants has long puzzled scientists, since it is extremely unstable, so much so that it disintegrates 0.000000000000001 (10-15) seconds after it was formed.

So how can this beryllium isotope become carbon, if it is effectively destroyed in the same instant it is formed? Do the helium atoms that fuse with the beryllium isotope do so by chance? Most certainly not, as this is more improbable than two bricks blown apart within the space of 0.000000000000001 seconds being joined a third, thus eventually forming a whole building.

While investigating the nuclear reactions that lead to the formation of carbon in the stellar cores, [Fred] Hoyle was struck by the fact that the key reaction proceeds only because of a lucky fluke. Carbon nuclei are made by a rather tricky process involving the simultaneous encounter of three high-speed helium nuclei, which then stick together. Because of the rarity of triple-nucleus encounters, the reaction can proceed at a significant rate only at certain well-defined energies (termed “resonances”), where the reaction rate is substantially amplified by quantum effects. By good fortune, one of these resonances is positioned just about right to correspond to the sort of energies that helium nuclei have inside large stars.

Such a chemical reaction is beyond by coincidence—it’s impossible! But since Paul Davies is a sworn materialist, he tries to explain it away with a pointless and irrational reference to “good fortune.” Davies is aware of this miracle and does not conceal his bewilderment when explaining this process, but nevertheless adopts such unscientific and irrational terms as “lucky fluke” or “good fortune,” simply because he rejects Creation.

Inside red giants another miracle called double-resonance takes place. First, two helium atoms fuse to create beryllium, then within the space of 0.000000000000001 second, a third helium atom combines with the first two, to produce carbon.

George Greenstein explains why this double-resonance process is so extraordinary:

There are three quite separate structures in this story—helium, beryllium, and carbon—and two quite separate resonances. It is hard to see why these nuclei should work together so smoothly… Other nuclear reactions do not proceed by such a remarkable chain of lucky breaks…It is like discovering deep and complex resonances between a car, a bicycle, and a truck. Why should such disparate structures mesh together so perfectly? Upon this our existence, and that of every life form in the universe, depends.

As we have seen, Greenstein (another materialist scientist), explains this miracle of Creation with “a remarkable chain of lucky breaks;” a wholly unscientific approach. Exactly because this is an impossibly unlikely thing to happen by chance, Greenstein makes the analogy of a very complex and crucial resonance between a car, a bicycle and a truck. He fails to call this a miracle because of his materialist credentials.

Further, some other elements like oxygen were formed by such extraordinary processes of resonance. Fred Hoyle discovered these extraordinary processes, and in his book Galaxies, Nuclei and Quasars, he concluded that such precisely structured processes could not have arisen through the work of coincidences. Despite being a sworn materialist, he conceded that such double resonances had to be the result of design.

In another article, he wrote:

If you wanted to produce carbon and oxygen in roughly equal quantities by stellar nucleosynthesis, these are the two levels you would have to fix, and your fixing would have to be just about where these levels are actually found to be… A common-sense interpretation of the facts suggests that a super intellect has monkeyed with physics, as well as chemistry and biology, and that there are no blind forces worth speaking about in nature. The numbers one calculates from the facts seem to me so overwhelming as to put this conclusion almost beyond question.

This miraculous process so affected Hoyle that he was convinced other scientists could not possibly ignore this clear fact:

I do not believe that any scientist who examined the evidence would fail to draw the inference that the laws of nuclear physics have been deliberately designed with regard to the consequences they produce inside the stars.