How Do We Know God Exists? 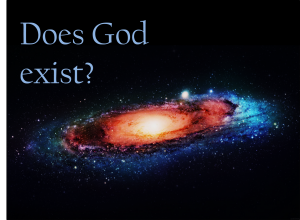 Everything is put together to sustain human life.

Even on a very fundamental level we find that throughout history there is a very strange phenomenon that people of different backgrounds, living in so many different parts of the world at different points in time, have always had this strong urge within themselves to look and to yearn for the Creator. They see that there is some power, a magnificent and merciful power that is sometimes interpreted in a mistaken way by materializing that in some form or other (i.e. idols). The basic yearning has always been there. Even in places where there is no recorded history of a particular prophet, people have yearned for a Creator. That’s what I’m referring to as an innate nature. The Arabic term is ‘fitra.’ Fitra literally translates to: something that one is created with or created in accordance with: this innate nature.

Is the intellect an enemy to faith?

All human faculties such as the senses including also the intellect are part and parcel of the whole process of seeking the truth. None of these by themselves will be sufficient, but on a whole they are not really in contradiction. In fact I would say, even more positively, that from a Muslim point of view one of the main things that make the human being distinct, one of the basic blessings that he is given by God to make him different from animals since animals can think as well, is intellect. So the intellect is a God given gift or blessing. How could we interpret that as a challenge or antithesis of faith? This doesn’t really stand.

On the personal or individual level, one doesn’t have to venture far to realize that God does exist. Just look into yourself, you don’t have to be a scientist but if you are then you’ll appreciate more the construction of the body; how it is made up of many cells. One cell becomes a cell for sight and the other for hearing; it’s amazing. How does the brain operate? The circulatory system? The digestive system? The nervous system? Such coordination and beauty [is shown through their functioning]. This shows that these things didn’t come to be in a haphazard way, there must have been a deliberate design behind them. So if you want to find God then look into yourself. The Qur’an says, “By looking into yourselves, you will find evidence to the presence and powers of God.”

In another verse it even says, “Do they not reflect in their own minds?” (30:8) In fact, if one really divorces himself from any prejudice caused by societal pressures one way or the other, or the worship of science as the ultimate thing, if one utilizes science in the proper way, you wouldn’t have to look at the body as a whole, just start analyzing one single organ and see how it works. Like some scientists would tell you that in order to duplicate the digestive system you’d need a huge laboratory and still it wouldn’t operate as efficiently as a naturally created organ would such as the stomach. We have acids in our stomachs that can erode metal but it doesn’t hurt us.  How could that be haphazard? If one aspect of that was developed by chance would everything else falling in line and falling together also happen by chance?

The Environment and Cosmic Order

Let’s move on to beyond ourselves, to find further evidence, the Qur’an also implores people to consider and to think. Take one aspect that many people think about today as very fashionable, like the ecological balance for example. Many people would take that as very clear evidence again that there is a design in this universe; vegetation as it relates to animal life and to human life; and the various atmospheric layers that we have. Everything is put together to sustain human life. If you look into the Qur’an, you find this mentioned. In one verse, in the Qur’an, it says, “God created everything in exact proportion.” (16:25) This is a very important term “in exact proportion” it’s not just that He created but that there is a deliberate design behind putting all of these things together.

In another verse, when people look at the whole scheme of creation, it says, “Were they created from nothing or are they themselves the creators?” No one claims that he’s created from nothing nor can he claim that he is the creator [of the heavens and earth]. Then the verse continues, “Or did they create the heavens and earth?” No one claims that. Then it says, “Nay but they see not.” (52: 35-36) So the science is there. It’s whether we apply it in the right place and in the proper way or not that makes the difference.

Finally, if you move into what I would call the third circle, not just looking into ourselves or the environment around us but looking into the whole cosmic order, again there is a design. The planets. The solar system. The way everything is coordinated. The distance between the sun and the earth, which if decreased may burn everything and if decreased everything would freeze. This is all deliberate. The succession of day and night, the circulation or changes of seasons, which has very important relevance to the lives of the people, to vegetation, and to animal life; all of these beautiful things that we are in awe at in the universe, we look at them with great admiration, definitely show that there is a design behind them and as is obvious any design needs a designer or creator it.

One verse in the Qur’an implores us in particular to this area and says, “Have they not reflected on the domain of the heavens and earth and what God created therein?”

In another verse it also says, in the general sense of the meaning: in the creation of the heavens and earth and in the succession of day and night there are certainly signs for those who reflect. Those who remember God while standing, sitting, and laying down and ponder on the creation of the heavens and the earth, saying: Our Lord you have not created this in vain. Glory be to You. Give us salvation from the penalty of the Fire. (3: 190-191)

In talking about the senses and the intellect or knowledge, I think anyone, even a person who does not believe in God, would admit readily that our senses are limited. Our perceptions are limited. Our sight, hearing, etc- we know that. Also, we know that our perceptions could also be deceived or they can deceive us. If you put a spoon in a glass of water, it looks crooked. A very well known phenomenon is of people traveling in the desert or in hot areas and would see in front of them a lake or a puddle of water- the mirage- but it actually does not exist. At the time it’s seen it is a reality to the person seeing it. So our perception is very useful, but it still falls short of getting to know everything.

On the other hand, science is fine. Science can resolve many issues and problems that are purely scientific- that are purely technical. Science can tell you for sure how to use technology for example to communicate sounds and pictures; this can be determined fully by science. However, there are many aspects in lives of people that are beyond science also. There is the moral aspect, there are the ethical standards, and there is the application of the fundamental principal of good and bad. As we said the [principle of good and bad] is instinctive but still needs some modifications and limitations. And we know throughout history that people have always had differences as to what exactly defines the proper ethical or moral standards. In order to resolve that problem, there must be a higher authority, God, Himself, telling us and providing us with stable standards of ethics and morality within which you can interpret various details.

Finally, and perhaps this is in my mind the most important reason, is that we know that knowledge is not only limited to science or books or perception. We know that there are certain aspects of knowledge, legitimate knowledge, which does not lend itself to any of those tools. For example, take the knowledge of the unseen. What happened in the past before history was recorded? If you wanted to get any information on that there is no recorded history. Or at least there is dispute about the recorded history. Revelation can tell you what, for example, the stories of previous prophets and what they said and what their message was.

There are issues that no matter how much you use your mind you will not be able to arrive at a final conclusion. An example of that would be the knowledge about God. You can’t feel the presence of God. You can feel the attributes of God but you can’t have full knowledge without having a prophet or messenger in receiving that revelation from God and the communication from Him to us. So, in essence, I don’t see contradiction. Actually, they all supplement each other. They have to be simply used in the proper context.

Dr. Jamal Badawi is a professor at Saint Mary’s University in Halifax, Canada, where he currently teaches in the areas of management and religious studies. He is the author of several works on various aspects of Islam.