Human Embryos Have Gills: A Myth? 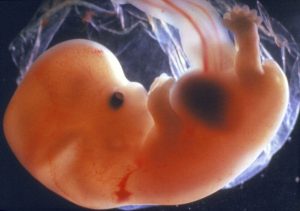 The human embryo at about 7 weeks, measuring about 3cm. Most of the primitive organ systems & external appendages are formed: the arms & legs have budded (the toes are visible); the retina of the eye & nose may be seen. The large dark mass in the body cavity is the enlarged liver, which manufactures red blood cells until the bone marrow (as yet undeveloped) takes over. The brain is undergoing radical divisions: the void at the base of the head has yet to be filled by further growth. The umbilical cord (top right) connects with the placenta, an organ rich in blood vessels which interfaces with the maternal circulation, exchanging nourishment & waste products.

Human Embryos Have Gills: A Myth?

This article answers the following question: What scientific forgery is the myth that “human embryos have gills” based on?

The thesis that living things go through various stages in their mothers’ wombs that can be seen as evidence for evolution has a special position amongst the unfounded claims of the theory of evolution. That is because the thesis, known as “recapitulation” in evolutionist literature, is more than a scientific deception: It is a scientific forgery.

The term “recapitulation” is a condensation of the dictum “ontogeny recapitulates phylogeny,” put forward by the evolutionary biologist Ernst Haeckel at the end of the nineteenth century. This theory of Haeckel’s postulates that living embryos re-experience the evolutionary process that their pseudo-ancestors underwent. He theorized that during its development in its mother’s womb, the human embryo first displays the characteristics of a fish, then those of a reptile, and finally those of a human. The claim that the embryo possesses “gills” while it develops stems from this thesis.

However, this is utter superstition. Scientific developments in the years since recapitulation was first broached have enabled studies to be made of just how valid it is. These studies have shown that the recapitulation doctrine has no other basis than evolutionists’ imaginations and deliberate distortions.

It is now known that the “gills” that supposedly appear in the early stages of the human embryo are in fact the initial phases of the middle-ear canal, parathyroid, and thymus. That part of the embryo that was likened to the “egg yolk pouch” turns out to be a pouch that produces blood for the infant. The part that was identified as a “tail” by Haeckel and his followers is in fact the backbone, which resembles a tail only because it takes shape before the legs do.

These are universally acknowledged facts in the scientific world, and are accepted even by evolutionists themselves. George Gaylord Simpson, one of the founders of neo-Darwinism, writes:

Haeckel misstated the evolutionary principle involved. It is now firmly established that ontogeny does not repeat phylogeny.

The following was written in an article in New Scientist dated October 16, 1999:

[Haeckel] called this the biogenetic law, and the idea became popularly known as recapitulation. In fact Haeckel’s strict law was soon shown to be incorrect. For instance, the early human embryo never has functioning gills like a fish, and never passes through stages that look like an adult reptile or monkey.

In an article published in American Scientist, we read:

Surely the biogenetic law is as dead as a doornail. It was finally exorcised from biology textbooks in the fifties. As a topic of serious theoretical inquiry it was extinct in the twenties…

As we have seen, developments since it was first put forward have shown that recapitulation has no scientific basis at all. However, those same advances would show that it was not just a scientific deception, but that it stemmed from a complete “forgery.”

Ernst Haeckel, who first put the recapitulation thesis forward, published a number of drawings to back up his theory. Haeckel produced falsified drawings to make fish and human embryos resemble each other! When he was caught out, the only defense he offered was that other evolutionists had committed similar offences:

After this compromising confession of “forgery” I should be obliged to consider myself condemned and annihilated if I had not the consolation of seeing side by side with me in the prisoner’s dock hundreds of fellow-culprits, among them many of the most trusted observers and most esteemed biologists. The great majority of all the diagrams in the best biological textbooks, treatises and journals would incur in the same degree the charge of “forgery,” for all of them are inexact, and are more or less doctored, schematized and constructed.

In the September 5, 1997, edition of the well-known scientific journal Science, an article was published revealing that Haeckel’s embryo drawings were the product of a deception. The article, called “Haeckel’s Embryos: Fraud Rediscovered,” had this to say:

The impression they [Haeckel’s drawings] give, that the embryos are exactly alike, is wrong, says Michael Richardson, an embryologist at St. George’s Hospital Medical School in London… So he and his colleagues did their own comparative study, reexamining and photographing embryos roughly matched by species and age with those Haeckel drew. Lo and behold, the embryos “often looked surprisingly different,” Richardson reports in the August issue of Anatomy and Embryology.

Later in this same article, the following information was revealed:

Not only did Haeckel add or omit features, Richardson and his colleagues report, but he also fudged the scale to exaggerate similarities among species, even when there were 10-fold differences in size. Haeckel further blurred differences by neglecting to name the species in most cases, as if one representative was accurate for an entire group of animals. In reality, Richardson and his colleagues note, even closely related embryos such as those of fish vary quite a bit in their appearance and developmental pathway. “It [Haeckel’s drawings] looks like it’s turning out to be one of the most famous fakes in biology,” Richardson concludes.

It is noteworthy that, although Haeckel’s falsification came out in 1901, the subject was still portrayed in many evolutionist publications for nearly a century as if it were a proven scientific law. Those who held evolutionist beliefs inadvertently sent out a most important message by putting their ideology before science: Evolution is not science, it is a dogma that they are trying to keep alive in the face of the scientific facts.

Taken with slight editorial modifications from Harun Yahya’s book, The Collapse of the Theory of Evolution In 20 Questions.