In Chapter “Joseph”, the ruler of Egypt is called “King” and not “Pharaoh”. Why? 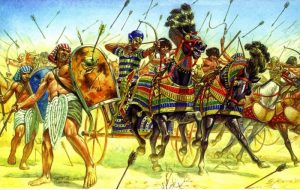 In Chapter “Joseph”, the ruler of Egypt is called “King” and not “Pharaoh”. Why?

The story of Joseph (Prophet Yusuf) does not only relate events and draw characters.

It goes beyond this to point out the period in history when these events took place and describes its general features.

Egypt was not ruled at the time by pharaohs of Egyptian descent. It was instead under the rule of a nomadic people who had learnt something about the divine faith from Prophets Abraham, Ishmael, Isaac, and Jacob who lived nearby.

This distinction determines the time when Yusuf was in Egypt, namely between the 13th and 17th dynasties, which belonged to the nomads whom the Egyptian people called the Hyksos. Their rule in Egypt lasted about 150 years.

When the Pharaohs of Egypt regained power with the 18th dynasty, they began to suppress the monotheistic faith and its adherents, particularly the Children of Israel (i.e. Jacob’s descendants), in order to reinstate the idolatry that gave the Pharaohs their authority.

However, the conflict between the two faiths is, in fact, the prime reason for such persecution, because the spread of the monotheistic faith destroys the very basis of Pharaohs’ rule since it stands firmly against all tyranny.