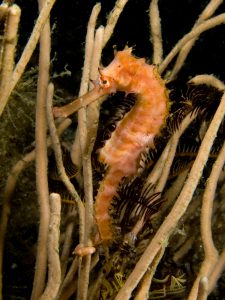 Sea horses are merely one of the numerous marine species. The creation of such a being is another proof of Allah’s infinite power and endless knowledge.

You may have seen sea horses on television or in books. Their unusual horse-like appearance and their wavering pattern of swimming might have attracted your attention. Did you know that, contrary to what one might suppose, these animals are very small? Sea horses, which are 4 to 30 centimeters (1.5 to 12 inches) in size, generally live among seaweed and other plants close to the shore. The bony armor of the sea horse protects it against dangers. This armor is so tough that it is virtually impossible to crush a dried sea horse using your hands.

The movements of these fish in the water are also worth consideration because they swim by means of a quite unique system. Each sea horse has a number of swim bladders. Making necessary modifications in the amount of the gas filling these bladders, a sea horse can swim upwards and downwards. If these bladders are damaged and even a minor amount of gas is lost, the sea horse sinks deep down in the sea, which means death for it. One point should be noted here: the amount of gas filling the swim bladders has been arranged exactly. Therefore any change could result in the death of the animal.

What this exact arrangement reveals to us is of great importance. If sea horses can survive only with a certain amount of gas in the bladders, then they must have possessed the current features they have today when they too first emerged. In other words, sea horses have not attained their features in time as claimed by evolutionists. They were created together with all their features and characteristics out of nothing and all at once. Like all creatures in the universe, Allah created sea horses complete and perfect.

Sea horses are merely one of the numerous marine species. The creation of such a being is another proof of Allah’s infinite power and endless knowledge.

“He [Allah] hath created the heavens without supports that ye can see and hath cast into the earth firm hills so that it quake not with you; and He hath dispersed therein all kinds of beasts. And We send down water from the sky and We cause (plants) of every goodly kind to grow therein. This is the Creation of Allah. Now show me that which those (ye worship) beside Him have created. Nay, but the wrongdoers are in error manifest!” (Luqman 31: 10-11)