Is Thinking Too Much Not Good? 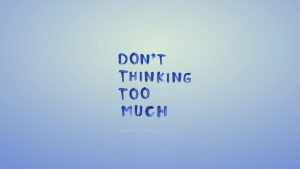 Allah has created the world incomplete and flawed in order to test people.

There is a conviction prevalent in society that deep thought is not good. People warn one another saying, “Don’t think so much, you will lose your mind“. This is surely nothing but a superstition invented by people who are remote from religion. People should not avoid thinking but thinking negatively or being carried away by exaggerated scruples and misapprehensions.

Since those who don’t have strong faith in Allah and the hereafter think without committing themselves to goodness, but instead negatively, then by their contemplation they achieve outcomes that are not entirely beneficial. They think, for example, that the life of this world is temporary, and that one-day they will die, but this causes them to display great pessimism. This is because, conscientiously, they are aware that the life they pass without following the commands of Allah prepares a wretched end for them in the hereafter. Some, on the other hand, are pessimistic because they believe that they will totally vanish after death.

A wise person who believes in Allah and the hereafter draws completely different conclusions when he reflects on the fact that the life of this world is temporary. First of all, his realisation that the world is temporary causes him to engage in zealous struggle for his real and eternal life in the hereafter. Since he knows that this life will sooner or later end, he does not become carried away by the ambition for worldly passions and interests. He is extremely resigned. Nothing in this temporary life annoys him. He always cherishes the hope of attaining an eternal and pleasant life. He also greatly enjoys worldly blessings and beauty. Allah has created the world incomplete and flawed in order to test people. The intelligent person thinks that if there is so much beauty, which is pleasing to man even in this incomplete and flawed world, then the beauty of paradise should be unimaginably more attractive. He hopes to see in the hereafter the “originals” of every beauty he views here. And he comprehends all of these by thinking deeply.

Therefore, it would be a great loss to worry about “what if I become pessimistic by finally seeing the truth”, and hence, avoid thinking. For a person who always entertains hope by virtue of his faith in Allah, and who thinks positively, there is nothing that leads to pessimism.