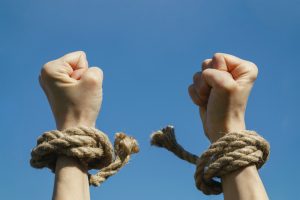 Islam forbade its followers to enslave people in any case.

Prophet Muhammad (peace be upon him) fourteen centuries ago ordered kind treatment for the prisoners. They could get their freedom if they paid a small redemption, and some without any thing (some taught Muslim children to read and write as redemption), and no mother was to be separated from her child, nor a husband from his wife.

Prophet Muhammad commanded his companions to be kind to their prisoners, and to serve them before themselves when it came to food. God tells us to give food, in spite of our need for it (for the love of Him), to the poor, the orphan, and the captive.

And they give food in spite of love for it to the needy, the orphan, and the captive, We feed you seeking God’s Countenance only. We wish for no reward, nor thanks from you. (Al-Insan 76:8-9)

In the pre-Islamic days, slaves were commercial goods, and slavery was an established system. It was a source of sustenance for thousands. To the aristocracy, the number of slaves was a symbol of status.

Islam could have used force to fight slavery but without doubt this would have caused animosity. Islamic strategy focused on changing the stand of the community, so slaves after liberation would become its ordinary members, without any kind of demonstrations or strikes.

Islam waged a war against slavery in which neither sword was resorted to, nor was blood spilled.

Before Islam, slavery was without restrictions. Those who could not repay debts became slaves; war captives were either killed or enslaved. Slaves were hunted like animals, killed or captured.

Islam forbade its followers to enslave people in any case. The only exception was an idolatrous enemy captured in war fought either in self-defense or with the permission of Prophet Muhammad or one of his companions.

Before Islam, the invader could do with his enemy whatever he liked. He could put the arrested soldiers to death, enslave them or keep them under his authority, and  the ruler could enslave, depending on his own desire, anyone  under his control. The father had absolute authority over his progeny, he could sell or gift them away; loan them to someone else, or exchange them with another’s son or daughter.

Islam dried up this system. No ruler was allowed to treat his offspring as his slaves. Every individual was bestowed with well-defined rights; the ruler and the ruled, the progenitor and the offspring had to live within the limits prescribed by religion; no one could transgress those limits.

Enslavement in Islam was only allowed in a defensive war against unbelieving enemy who launched a war against Muslims. At the same time, Islam raised the status of a slave to that of a free man; and opened many ways for the emancipation of slaves.

Islam commands Muslims to show mercy to those combatants who surrender.

And if one of the disbelievers surrenders and pleads mercy, then show mercy so that they can hear the words of God, and then allow him to go back to his place of safety. (At-Tawbah 9:5)

Earlier, slave trade was started by the West (the starting of the colonization), wars were the main source of slaves. Islam did not permit wars of aggression. All the battles fought during the life-time of Prophet Muhammad were defensive battles.

…..to let the captives go free, either with or without any ransom. (Muhammad 47:4)

After that Islam started an active operation to liberate the slaves, making the liberation of slaves a way of expiation for many sins.  If a man failed to fast without any excuse during the month of Ramadan for example, he had to free a slave for each day. In addition a slave had to be freed for every breach of vows, an accidental homicide, for unintentionally killing a Muslim and for many other transgressions.

Islam’s objective was to create a society free from this system. Therefore, any slave woman who gives birth to a child by her master could not be sold and after her master’s death, she becomes a free woman. Unlike all previous customs, Islam ordained that the child born to a slave woman by her master should follow the status of the father.

Slaves were given a right to redeem themselves either on payment of an agreed sum or on fulfillment of service for an concurrent period.

…, and those who seek a contract [for eventual emancipation] from among whom your right hands possess – then make a contract with them if you know there is within them goodness and give them from the wealth of God which He has given you. And do not compel your slave girls to prostitution, if they desire chastity, to seek [thereby] the temporary interests of worldly life. And if someone should compel them, then indeed, God is [to them], after their compulsion, Forgiving and Merciful. (An-Nur 24:33)

When a slave wants to get a mutual written contract, the master should accept it. Muslims had to help the slaves achieve liberty.

Islam also ordains that slaves seeking freedom should be helped from the public treasury. Prophet Muhammad and his companions provided ransom for the slaves out of state coffers.

The Quran recognizes the liberation of slaves as one of the permissible expenditures of alms and charity. When a slave wants freedom, the master has to agree and has to help the slave from his own wealth. Slaves should live a respectable life after earning their freedom.

Therefore, despite a culture based on slavery, Islam laid down the path and legislated the most effective way to end this practice.

One of the fundamental rights in Islam is that everyone has the right to choose the religion he wants to embrace.

There shall be no compulsion in [acceptance of] the religion. The right course has become clear from the wrong. So, whoever disbelieves in Taghut (Satan and every leader of misguidance) and believes in God has grasped the most trustworthy handhold with no break in it. And God is Hearing and Knowing. (Al-Baqarah 2:256)

Faten Sabri (1973) is a modern Jordanian Muslim thinker. She is well known for her frequent interaction with various cultures, religions and she speaks different languages. She studied comparative religions which made her able to discuss the controversial issues about Islam with the truth seekers and free thinkers. She wrote books about the message of Islam, the original concept of God and Jesus Christ in Islam and she has monthly articles in an international magazine. These books and articles were translated and distributed in more than 6 languages.