Islam: The Religion of Nature

Islam has called itself a ‘Natural Religion’ which is free from all these impurities : 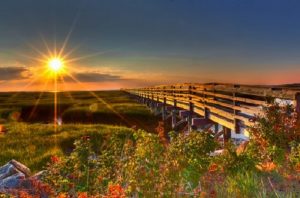 So (O Prophet) set your face steadily and truly to the faith. (Establish) Allah’s nature on which He has framed mankind. There is no change in what Allah has created; that is the standard religion; but most among mankind do not understand. (Ar-Rum 30:30)

The function of the eye is to see until there is some disturbance in it. The ear hears the sound till it becomes deaf.

The function of the nature is to follow the right path, and to rush towards it with such alacrity as the water rushes down from a height, unless it is overcome by corruption and wickedness, which may take its reins in hands and turn it away from the path of righteousness and blessings.

The disturbing things, which corrupt nature are sometimes the result of the past centuries or sometimes they are the creation of the lowly environment and ha bits and customs, or both these things together are responsible for the disturbances.

These things are a great danger for the nature of man. They cause a variety of diseases in it. The real jihad of a reformer is to fight these inhibitions and customs and to weaken their strength. He tries to relieve nature of these dangers in order that its original purity may be regained and it may be able to fulfill its real responsibility.

Islam has given a full clarification of this method.

After explaining the natural religion in the above quoted verses, the Qur’an says immediately thereafter :

Turn back in repentance to Him, and fear Him; Establish regular prayers, and be not you among those who join gods with Allah, those who split up and become sects, each party rejoicing in that which is with itself. (Ar-Rum 30:31-32)

Remaining on the Right Path

To encourage faith in place of disbelief, righteousness in place of wickedness, to adopt the policy of fearing God, in place of disturbed thoughts in respect of Allah the righteous people’s unity of thought and action-these are the manifestations that show that man has remained on the righteous nature. This has been clarified in the following verse of the Qur’an:

We indeed created man in the best of moulds, then we have abased him to be the lowest of the low, except such as believe and do righteous deeds. (At-Tin 95:4-6)

What is the best mould or form of man? The understanding of Truth and adopting it, fulfillment of its requirements and meeting of its demands.

This is called the attachment to virtuousness and decency, and consideration of these two good qualities in man’s individual and collective life is the real achievement. And attempts to make them operative in all the departments of life is the real mould and form.

But there is a very large number of people who do not reach this high level. They remain attached to the earth only.

They follow their own desires, and express disobedience of God’s commands. In this way they fall to the lowest level

The Qur’an has called this “Asfala safileen” (lowest of the low), to which Allah has thrown such people.

To throw the men of such nature to the lowest level is according to the divine law regarding guidance and transgression. And these laws are true and based on justice. The Qur’an mentions them as under:

And Allah will not mislead a people after He has guided them, in order that He may make clear to them what to fear (and avoid)-for Allah has knowledge of all things. (At-Tawbah 9:115)

In Surah Al-A`raf this law of guidance and transgression has been mentioned thus:

Those who behave arrogantly on the earth in defiance of right-them I will turn away from My signs; even if they see all the signs, they will not believe in them; And if they see the way of right conduct, they will not adopt it as the way of error is the way they will adopt; for they rejected Our signs, and failed to take warning from them. (Al-A`raf 7:146)

Who is it then that remains on the ‘best mould’ and keeps himself away from the indignities of the world? In the verses of the Surah At-Tin occurring immediately after those quoted above the answer is given:

Except such as believe and do the righteous deeds. (At-Tin 95:6)

Thus, the outcome of faith and the righteous deeds is the excellence of moral character.

There Is a Counter to the Wicked Nature

Islam’s stand ,in relation to man’s pure nature and its strength and firmness has been discussed. As regards its dealings with the devil-like natures, that has also been made clear. Islam warns mischievous-natured people. It entrusts its reins in the hands of the healthy intellect; it encourages it to bow down to the pure nature and to surrender itself to Allah.

The prophet has hinted at some of these kinds of natures :

“The son of Adam reaches the old age and two of his habits do not leave him. One is greed and the second is the unending succession of hopes.” (Muslim)

“The worst evil found in man is the frightening cowardice and the un-dignifying miserliness.”(Abu Dawud)

“If the son of Adam is given a valley of gold, he will desire to have another one. And if the other is also given, he will be greedy to have the third one. The hunger of Adam’s son will not be satisfied except when his remains are mixed with the dust. And the one who turns to Allah, Allah accepts his repentance.” (Al-Bukhari )

The Qur’an has mentioned some of the habits:

Fair in the eyes of men is the love of things they covet, women and sons; heaped up hoards of gold and silver; horses branded (for blood and excellence) ; and (wealth of) cattle and well-tilled land. Such are the possessions of this world’s life; but in the nearness to Allah is the best of the goals ( to return to ). (Aal `Imran 3:14)

The first thing Islam wants man to pay attention to is this that to run after the carnal desires of the self and to follow its unending demands will never satisfy self and make it contented. Truth and right path will not be acceptable to it.

The condition of the self is that when its one desire is satisfied, it immediately demands to have some other desire satisfied. It is always busy in eating, drinking, and having a good time, and greedy with desire to have more and more of everything. It has no hesitation in committing sin and acts of aggression and cruelty.

Therefore, Qur’an has forbidden men to follow the desires that have been considered haram (prohibited):

The article is excerpted from the book  “Muslim Character” , an American-English translation of Muhammad Al-Ghazali’s Khuluq Al-Muslim