The spread of the novel coronavirus (covid-19) has affected people’s lives worldwide. In their attempt to limit the spread of the virus, governments are banning public gatherings. The outbreak of the virus has led to the suspension of congregational prayer including the Jumu’ah (Friday Prayer) at mosques in most countries.

However, family members still have the opportunity to perform prayer in congregation at home. This article will address this recent juristic issue.

“The congregational prayer is twenty seven times superior to the prayer offered by person alone.”

The General Ruling on Congregational Prayer

Scholars have divergent opinions regarding the legal ruling of congregational prayer. It is highly recommend according to the majority of the shafi’i and maliki scholars. On the other hand, the hanbali scholars hold the opinion that it is compulsory. The following hadith may serve as evidence for the first opinion.

Allah’s Messenger (peace be upon him) said, “The congregational prayer is twenty seven times superior to the prayer offered by person alone.” (Al-Bukhari and Muslim)

As for the second opinion, there is evidence from the Quran and the Sunnah to support it. Allah says,

Abu Hurairah (May Allah be pleased with him) reported:

Suspension of Congregational Prayer during the Pandemic

Today, there is an exceptional situation which requires a new legal ruling. Since covid-19 is highly contagious, it is allowed to suspend congregational acts of worship especially prayer.

In fact, scholars have mentioned a good number of legal excuses that allow a person not to perform prayer at the mosque. The fear that harm can befall oneself, one’s property or one’s honor is one of these excuses. This includes the fear to contract covid-19 or pass it to others. In this situation the fear has prevailed. So, it is right to suspend the congregational prayer at mosques. Narrated Hudhaifa:

The Prophet (ﷺ) said (to us), “List the names of those people who have announced that they are Muslims.” So, we listed one thousand and five hundred men. Then we wondered, “Should we be afraid (of infidels) although we are one thousand and five hundred in number?” No doubt, we witnessed ourselves being afflicted with such bad trials that one would have to offer the prayer alone in fear. (Al-Bukhari and Muslim)

In addition, the general juristic rule is that the repelling of harm takes presence over the procurement of good.

There are a few countries where people can still perform prayer at mosques. They have taken different precautions to contain the spread of the virus. Although people can attend the congregational prayer at mosques, everyone must keep a space between himself and the person next to him. Other precautions include avoiding shaking hands, using private prayer mat, allowing a few number to attend, etc. If covid-19 did not spread easily in closed spaces, such measures might be a good solution.

How to Perform Congregational Prayer at Home?

If you live in a country where the congregational prayers are suspended, you can perform them with your family members. In this way, you can get the reward of performing prayers in congregation.

As for the Jumu’ah prayer, there is a substitute for it i.e. the Dhuhr (Noon) Prayer. The preferred opinion is that Jumu’ah may not be performed at home.

Besides, you may not follow the imam in prayer through broadcast while you are at home. This is by no means in accordance with the prerequisites of congregational prayer.

Who may be the imam?

A male person can lead both men and women. On the other hand, a female person may lead only females. 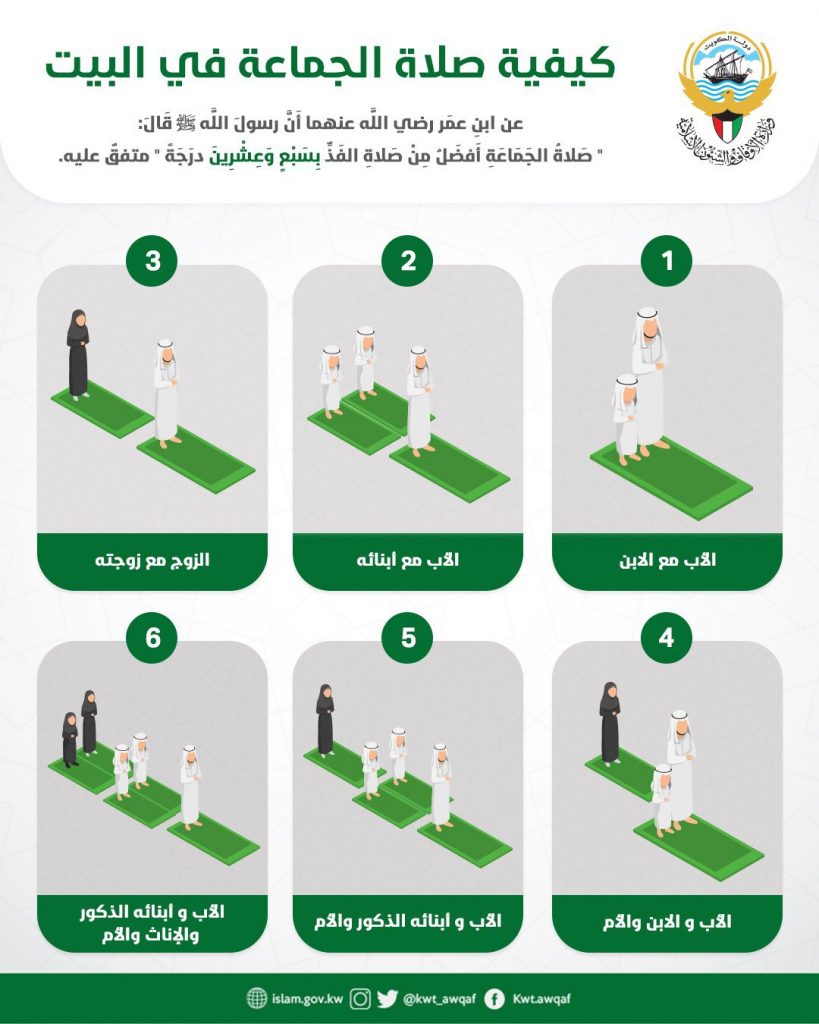 In case there is a father and a son, one of them can lead the prayer with the other following him while standing next to him on his right side.

Second, if the family members are three or more males, one of them can be the imam while the others standing behind him in a row.

Third, the family members may be one male and one female such as husband and a wife, a son and his mother, a father and his daughter, etc. Here, the male must be the imam and the female follows him in prayer while standing behind him.

Fourth, in case there are two males and one female, one of the two males may be the imam and the other male stands next to him on his right side. As for the female, she stands behind the imam.

Sixth, the family members may all be females. In this case one of them can lead the prayer. The more knowledgeable one in this regard is the best. However, according to the majority of scholars, the female imam stands in the middle of the first row among other women and girls.