Justice: Its Meaning and Significance 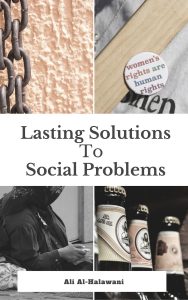 Cover of the Author’s ebook, Lasting Solutions to Social Problems

Justice is a concept of moral rightness, which is based on ethics, rationality, law, natural law, religion, equity and fairness.[1]

In Islam, justice stands for placing things in their rightful place.[2] It stands also for dealing with all others equally, with no discrimination whatsoever.

In his A Theory of Justice, Rawls claimed that “Justice is the first virtue of social institutions, just as truth is of systems of thought.”[3]

Perceptions of justice differ in every culture, as cultures are usually dependent on a mixture of history, mythology and/or religion. Each culture’s ethics create values which influence the notion of justice. Although some principles of justice can be found that are one and the same in all or most of the cultures, these are insufficient to create one understanding of justice.[4]

Remarkably, Islam lays great emphasis on justice because it facilitates the establishment of a social order that enables humans to develop the noble qualities inherent in them, to live in peace and harmony, and to make this world a place worth living in. A peaceful life is possible only when we are just concerning our thinking and activities.

Allah Almighty says in the Qur’an (what means),

{Indeed! We sent Our Messengers with clear signs and sent down with them the Book and Balance that people may uphold justice} (Al-Hadid 57:25).

In Islam, justice is significant as it is one of the 99 Divine Attributes of Allah. Allah Almighty is the Ever-Just. Justice is one of the basic values the Ever-Glorious Qur’an underlines and mentions repeatedly in a number of its ayahs. Allah Almighty enjoined Muslims to practice justice in all their affairs, starting with being just in rulership and governance, when giving testimonies and dealing with one’s family and spouse, and with all people, even foes and enemies. Allah Almighty says in the Qur’an (what means),

{Indeed, Allah commands you to render all [your] trusts to those to whom they are due. Moreover, whenever you judge between people, you shall judge with justice. Indeed, that to which Allah exhorts you is most excellent. Indeed, Allah is He Who hears and sees all things} (Al-Nisa’ 4:58).

{O you who believe! Stand out firmly for Allah and be just witnesses, and let not the enmity and hatred of others make you avoid justice. Be just, that is nearer to piety, and fear Allah. Verily, Allah is well-acquainted with what you do} (Al-Ma’idah 5:8).

Indeed, it is not enough for a true Muslim to do justice or act righteously when there are no disagreements; a Muslim is required to do justice to people who have a grudge against him or to whom he has an aversion. This is what the religion of Islam dictates for his followers.

This article is excerpted from the Author’s: Lasting Solutions To Social Problems; an ebook published by Amazon at: https://www.amazon.com/dp/B07LH5Y7NS

[1] Abdullah & Nadvi (2011). Understanding the principles of the Islamic world-view.