Khadijah: An Example for a Righteous Woman Serving Islam 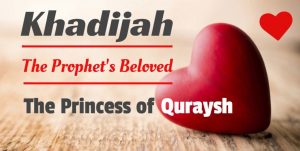 The reaction of Lady Khadijah upon hearing the Prophet’s account of his first encounter with Jibril points to her profound wisdom, understanding, and strength of heart.

“His heart trembling, the Messenger of Allah (peace be upon him) returned with some revealed verses in his heart. He  entered upon Khadijah bint Khuwailid (may Allah be pleased with her) and said, “Cover me! Cover me!’ And so they covered him and, when the terror (of what had happened) left him, he informed Khadijah about what had happened, (after which he said), ‘I fear for myself (i.e., I fear that I have gone mad). Khadijah said, “Never! By Allah, Allah will never forsake you, for you maintain the ties of kinship, you bear the burdens of the weak, you give to people what no one else is able to give (in terms of benefits and good manners), you hospitably entertain your guests, and you help people who are afflicted with calamities.”

Khadijah’s attitude and reaction upon hearing the Prophet’s account of his first encounter with Jibril points to her profound wisdom, understanding, and strength of heart. She was not frightened or startled; rather, she was the opposite: relaxed and calm. In her mind, she compared what she was hearing with the reality of the Prophet’s character and manners. Then she arrived at the only possible correct conclusion: if one, by his very nature, is possessed of all good qualities, characteristics, and manners, then Allah (Glory be to Him) will never forsake him. She reminded him about how good he was to his relatives, which was an apt remark, for if a person is successful in keeping good relations with his relatives – who are the closest of people to him – then it is only natural that he will be successful in doing the same with other people. This was particularly appropriate since the Prophet  was being prepared to convey the divine message of Islam to all of mankind. After reminding the Prophet (peace be upon him) about his many good qualities, Khadijah (may Allah be pleased with her) wisely took him to the one person she knew who could advise him – her cousin, Waraqah, who had become a Christian and who had told her that he was waiting for the coming of a Prophet in Arabia.

Khadijah believed, and in fact knew, from the depths of her heart that the Prophet (peace be upon him) possessed a noble character and the highest of manners and qualities. She inferred from this knowledge that the Prophet  would never in his life be subjected to shame and humiliation. This inference was most probably drawn from a general knowledge of historical principles: Whenever Allah  blesses one of his slaves with noble and good characteristics, He  will not make that slave taste humiliation and shame in his life. And Muhammad, Khadijah knew, had reached the pinnacle of nobility and goodness of character.

Khadijah took the Prophet  to her cousin Waraqah ibn Naufal (may Allah have mercy on him). Waraqah, Khadijah  knew, was waiting for the emergence of the final Prophet to be sent to mankind, an event that he learned about from Christian (and perhaps also Jewish) scholars, who pointed out to him that that awaited Prophet was soon due to appear. The words that Waraqah spoke to the Prophet  had a very soothing and strengthening effect on the Prophet’s heart. He informed the Prophet  that the being that had spoken to him was Jibril, who was a messenger between Allah and His Prophets.

In the course of their conversation, Waraqah did not hesitate but instead immediately believed that Muhammad k was the awaited Prophet, the final Messenger sent to mankind. The Prophet  later issued a statement, making it clear that Waraqah was one of the dwellers of Paradise. Al-Hakim related from `Aishah that the Prophet (peace be upon him) said, “Do not curse Waraqah, for I indeed saw that he had a garden or two gardens (in Paradise).” (Al-Mustadrak)

In another narration, `Aishah related that Khadijah once asked the Messenger of Allah about Waraqah, and he answered, “I did indeed see him, and when I did, I saw upon him white garments. I would judge that had he been from the dwellers of Hell, he wouldn’t have had upon him white garments  And Al-Haithami said, “Abu Ya`la related with a Hasan (acceptable) chain from Jabir ibn `Abdullah that, when the Messenger of Allah was asked about Waraqah ibn Naufal, he  said, “I saw him in the middle of Paradise, and upon him was a silk brocade.”

Khadijah  played an indispensable role in the life of the Prophet. To be sure, Allah guided the Prophet  to marry an ideal wife, one that, like her husband, was by her very nature all that is good, and as such, she became the best role model for all women who came after her. She  is particularly a role model for women whose husbands are Du`ah (those who invite others to the teachings of Islam), for Du`ah are not like other men: they carry the burden of a message and their efforts are constantly directed at solving the problems of not only their families, but of the entire Muslim nation. Great sacrifices – in terms of time, energy, and resources – are required of such men; they even have to give up some of the time that they would otherwise spend in the company of their families. They therefore need wives who appreciate the burdens that their husbands carry, who recognize the importance of conveying Islam to both Muslims and non-Muslims, and who stand alongside, and not in the way of, their husbands.

A righteous wife has the potential of having a tremendously positive impact on the success of the Da`wah; we have no better example that attests to this fact than the life of Khadijah and the way she stood side by side with the Prophet (peace be upon him) from the very outset of his Prophethood. So, whenever a Da`i (caller to Islam) is blessed with a righteous wife, he is one step closer to achieving success in his dealings with others. The Messenger of Allah put it best when he  said, “The world is mata` (mata` is anything from which pleasure can be derived), and the best Mata’ of the world is a righteous wife.” (Muslim)

Source: Taken with modifications from the author’s “The Noble Life of the Prophet Muhammad.”