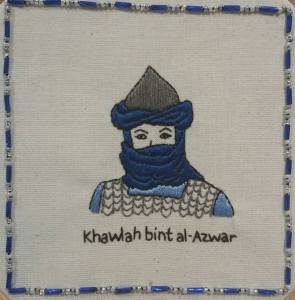 Khawlah became a legend during her life and remains a legend to this day.

This is the first article of a series that will deal with prominent Muslim female figures in history. A new story will be published every month; wait for the next astonishing story!

A Life of Bravery

Khawlah Bint Al Azwar was an extraordinary woman from the early years of Islam. Most of what history tells us about her childhood and environment is quite vague, but provides rich information about her courage that had most likely played a role in strengthening the new religion.

Khawlah became a legend during her life and remains a legend to this day. She was a courageous leader, and set an example to men and women alike that one should fight for what they believe in, and never accept defeat. She stayed true to her principles and feared nothing but Allah.

The recorded history of that era mentions repeatedly the feats of Khawlah in battles that took place in Syria, Jordan and Palestine. In one instance, she fought in disguise to rescue her brother Dirar after the Romans captured him. Witnesses say that she was in fact much braver than many men. In addition to that, and whenever she did not carry her sword, she took the responsibility of organizing medical care to treat the wounded during the battles. This is 13 centuries before Florence Nightingale did the same in Europe.

Khawlah was the daughter of one of the chiefs of Bani Assad tribe, and her family embraced Islam in its first days. Her father’s name is either Malik or Tariq Bin Awsi. Al Azwar was his nickname. Her brother, Dirar, was the knight and poet of his tribe, and was well known as well for his wisdom. His love for his sister and confidence in her capabilities were legendary. In fact, the brother and sister were so attached to each other that she was his companion wherever he went. He trained her in all arts of swordsmanship and she also became a knight. Besides that, Khawlah was a poet who mastered that noble art. She was a brunette, tall, slim and of great beauty.

Her name remained greatly unknown, until the battle of Ajnadin, not far from Jerusalem, where Dirar lost his spear, fell from his horse, and was taken prisoner. She donned a male knight’s attire, took her arms and rode her mare through the Roman ranks, using her sword skillfully against whoever tried to stop her. The Muslim soldiers, and their leader Khalid, watched her with great admiration, presuming that she was a man.

The Arab historian, Al Waqidi, tells us in his book “The Liberation Wars of Al-Sham (greater Syria)” that: “In a battle that took place in Beit Lahia near Ajnadin, Khalid watched a knight, in black attire, with a big green shawl wrapped around his waist and covering his bust. That knight broke through the Roman ranks as an arrow. Khalid and the others followed him and joined battle, while the leader was wondering about the identity of the unknown knight.”

Rafi’ Bin Omairah Al Ta’i was one of the fighters. He described how that knight scattered the enemy ranks, disappeared in their midst, reappeared after a while with blood dripping from his spear. He swerved again and repeated the deed fearlessly, several times. All the Muslim army was worried about him and prayed for his safety. Rafi’ and others thought that he was Khalid, who had won great fame for his bravery and genius military plans. But suddenly Khalid appeared with a number of knights. Rafi’ asked the leader: “Who is that knight? By God, he has no regard for his safety!”

Khalid answered that he didn’t know the man, though he greatly admired his courage. He called on the army to attack as one man and to make sure that they protect their hero(ine). They were fascinated as they watched the knight appear with a number of Roman knights chasing him. Then he would turn around and kill the nearest before resuming his attacks.

The Romans eventually lost the battle and fled, leaving many dead and wounded in the battlefield. Khalid looked for the knight until he found him. By then he was covered in blood. He praised his bravery and asked him to remove his veil. But the knight did not answer, and tried to break away. The soldiers wouldn’t let him do that. And everyone asked him to reveal his identity.

When the knight found that there was no way to avoid that, he replied in a feminine voice: “My prince, I did not answer because I am shy. You are a great leader, and I am only a woman whose heart is burning.”

“Who are you?” Khalid insisted.

“I am Khawlah Bint Al Azwar. I was with the women accompanying the army, and when I learnt that the enemy captured my brother, I did what I did.”

Khalid ordered his army to chase the fleeing Roman army, with Khawlah leading the attack, looking in all directions for her brother, but in vain. By noontime, the victory was decisive. Most of the Roman soldiers were killed.

Knowing that the prisoners had to be somewhere, Khalid sent Khawlah with a number of knights to find them. After a hot chase, they managed to catch up with a Roman detachment that was taking the prisoners to their headquarters. Another fight took place, the Roman guards were all killed and the prisoners saved.

In another battle in Ajnadin, Khawlah’s spear broke, and her mare was killed, and she found herself a prisoner. But she was astonished to find that the Romans attacked the women camp and captured several of them. Their leader gave the prisoners to his commanders, and order Khawlah to be moved into his tent. She was furious, and decided that to die is more honorable than living in disgrace. She stood among the other women, and called them to fight for their freedom and honor or die. The others were enthusiastic to her plan. They took the tents’ poles and pegs and attacked the Roman guards, keeping a formation of a tight circle, as she told them.

Khawlah led the attack, killed the first guard with her pole, with the other women following her. According to Al Waqidi, they managed to kill 30 Roman knights, while Khawlah was encouraging them with her verses, which in fact caused their blood to boil.

The Roman leader was infuriated by what happened, and led a detachment of his knights against the women, though he tried first to tempt them with many promises. He told Khawlah that he planned to marry her and make her the first lady of Damascus. But she answered him calmly and with great contempt: “I wouldn’t even accept you to be a shepherd of my camels! How do you expect me to degrade myself and live with you? I swear that I’ll be the one to cut off your head for your insolence.”

In the ensuing battle, the ladies proved their mettle, kept their grounds for some time, encouraging each other and driving off the attackers with their long poles. Suddenly, Khalid and the army reached the battlefield. In the ensuing fight, over 3.000 Romans were killed. The women who took part in the fighting were proud to say that Khawlah killed five knights, including the leader that insulted her.

In another battle, the Muslims were overwhelmed by a much bigger Roman army. Many soldiers fled away, but not for long. Khawlah and the other women met the fleeing soldiers, questioning their claims of bravery and forced them to return to the battle. The men were stunned when they saw Khawlah drawing her sword and leading a counter-attack. They turned their horses and joined the battle, which was eventually won.

One of the knights present that day said: “Our women were much harsher with us than the Romans. We felt that going back to fight and die was much easier than facing the fury of our women later on.”

Her marriage to Caliph Ali

Following his succession as the fourth caliph, Ali (may Allah be pleased with him) married Khawlah. She became a legend during her life and remains a legend to this day. Khawlah set an example to men and women alike that one should fight for what he or she believes in, and never accept defeat.