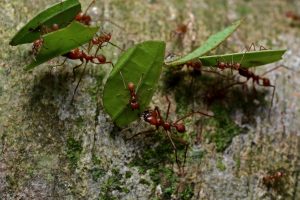 Why would they have carried all those leaves to their nests although they could not eat them?

The specific characteristic of the leaf-cutter ants also called “attas” is their habit of transporting the leaf pieces that they cut out on their heads. The ants hide under leaves that are quite large compared to their own sizes. These they secure in their closely shut chins. Therefore, the return voyage of worker ants after a day’s work presents a very interesting picture. Anyone who sees this happening would feel as if the floor of the forest were alive and walking. In the rainforest, their actions remove about 15 percent of leaf production. The reason for their carrying leaf pieces is, of course, not protection from the sun. Ants do not utilize these leaf pieces as food either. Then, in what way do they use so many leaves?

It has been discovered that, surprisingly, Attas use these leaves in fungus culturing. Ants cannot eat the leaves themselves, because they do not have enzymes in their bodies that could digest the cellulose in the leaves. Worker ants make a heap of these leaf pieces after chewing them and insert them into the garden substratum. In these chambers, they grow fungus on the leaves. This way, they obtain the required protein from the shoots of the fungus.

However, when Attas are removed, the garden would normally begin to deteriorate and would soon be overwhelmed by weed fungi. Then, how can the Attas, who clean their gardens only before “planting,” be protected against weed fungi? The trick of maintaining a pure fungus culture without constant weeding seems to depend upon the saliva the ants work into the compost as they chew it up. It is thought that the saliva contains an antibiotic that inhibits the growth of undesirable fungi. It probably contains a growth-promoter for the right fungus, too. What one has to ponder upon is the following: How have these ants learned to cultivate fungus? Is it possible that one day one of the ants took a leaf in its mouth by coincidence and chewed it, and then again by chance, it placed this liquid that had become porridge-like on a dry leaf floor which, by sheer coincidence is a totally appropriate place, and other ants brought pieces of fungus and planted them there and, finally, the ants which had anticipated that some sort of food that they could eat would grow there, started cleaning the garden, throwing out unnecessary material, and harvesting? And then they went over and conveyed this process to the whole colony one by one? Also, why would they have carried all those leaves to their nests although they could not eat them?

Furthermore, how could these ants have created the saliva that they use while chewing the leaves for the production of fungi? Even it is thought that they may form this saliva, one way or the other, with what information could they produce an antibiotic in their saliva which prevents the formation of weed fungi? Does it not require having a significant knowledge of chemistry to achieve such a process? Even if they did have such knowledge – which is impossible- how could they apply it and get their saliva to have this antibiotic substance characteristic?

When one thinks about how ants could realize such a miraculous event, hundreds of similar questions come up to none of which there are any answers.

On the other hand, if a single explanatory answer could be given, all these questions would have been answered. Ants have been designed and programmed to achieve the job they are performing. The observed event is sufficient to prove that ants are born or rather caused to be born knowing farming. Such complex behavioral patterns are not phenomena which may develop in stages and with time. They are the work of a comprehensive knowledge and a supreme intellect. Thus the claims by evolutionists that beneficial behavior is selected in time and the required organs develop through mutations seem totally illogical. It is, of course, no one other than Allah who gives this knowledge to the ants from day one, and Who creates them with all these astonishing features. It is Allah who is the “Creator” (Sani). The features of the Atta ants we mention above set forth a picture we shall face frequently all throughout this book. We are talking about a living being without the ability to think, but which nevertheless achieves a great task displaying a tremendous intellect. This is hard for man to conceive of.

Then, what does this all mean?

There is only one answer and it is a simple one: If this animal has no capacity to think in order to enable it to do what it is doing, then its show of intellect, in fact, introduces us somebody else’s Wisdom. The Creator Who has caused the ant to exist is letting this animal do things beyond its capacity to show His existence and superiority in His creation. The ant acts under Allah’s inspiration and the intellect it displays is in fact, the Wisdom of Allah.

Actually, a similar situation exists in the whole of the animal world. We meet creatures who display a very superior intellect, although they have neither an independent mind nor the capacity for judgment. The ant is one of the most striking of these and like other animals, acts, in fact, in accordance with the program it has been given by the Will that trains it. It reflects the Wisdom and power of Possessor of that Will, that is, Allah.