Lessons Learnt from the Story of Moses and Pharaoh 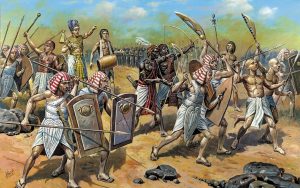 From this story, I learnt that slaves make their masters with their own hands!

Pharaoh was the king of Egypt who defied Prophet Musa (Moses), challenged him and prevented the Children of Israel from obeying him and declaring their faith in Allah, the One and Only God, with him. He kept his unfaithfulness and disbelief in the Lordship of Allah and the Prophethood of Musa until he met his death as he was drowned in the Red Sea during the manhunt he administered and led against Prophet Musa and his faithful followers.

Amazingly, the Noble Qur’an related to all humanity the minute details of that amazing story and as is known, the Qur’an is not a storybook to be used to entertain people. Rather, it is a book of guidance by which man and all humanity can find the true and straight path towards Allah the Almighty and His everlasting pleasure. Thereupon, from this amazing story one can learn many lessons and derive many useful tips and values. Foremost among these lessons, one can cite what follows:

Allah is Much Mightier than all and every Pharaoh;

Despair not, be saddened not, and have full trust in your Lord, Allah the Almighty;

“And Allah has full power and control over His Affairs, but most of men know not” (Yusuf 12: 12).