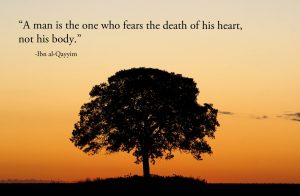 His extensive knowledge and understanding of Qur’anic commentaries surpassed even some renowned theologians in Islamic history.

Sham Al-din Muhammad Ibn Abi Bakr, Ibn al-Qayyim al-Jawziyyah. He was born in a small farming village near Damascus, Syria in 691 A.H./1292 C.E, and he studied under his father who was the local attendant (qayyim) of al-Jawziyyah school. Later on, he pursued his quest for knowledge at the hands of renowned masters and scholars of his epoch, as well as he studied the works and teachings of Sufi masters known in his time. His schooling centered around Islamic jurisprudence, theology, and the science of prophetic traditions.

In the year 712/ 1312 at the age of 21, he joined the study circle of Imam Ibn Taymiyyah who kept him in his company as his closest student and disciple, who later on became his successor.

Ibn al-Qayyim was fervent in his devotion to his teacher, and he was an excellent student and disciple of the great Muslim scholar Imam Taqiyyu-Deen Ahmad Ibn Taymiyyah. He defended his religious opinions and approaches, and he compiled and edited most of his works, and taught the same.

Because of their perception and opinions, both the teacher and the student were unjustly persecuted, tortured, and humiliated in public by the local authorities then, and they were imprisoned in a single cell, while other disciples were kept separate in the central prison of Damascus, still known to-date as al-Qal’ah. Among the imprisoned scholars, there also was a young man named Ibn Kathir who later on became as the most renowned Muslim scholar and compiler of the most comprehensive Qur’anic commentaries ‘Tafsir Ibn Kathir.’

Upon the death of Imam Ibn Taymiyyah, the disciples were set free from prison, and Imam Ibn al-Qayyim al-Jawziyyah furthered his studies and held study circles and classes for his own students. Ibn Jawziyyah taught Islamic Jurisprudence at al-Sadriyyah school, in Damascus, before he held the position of the Imam of the Jawziyyah school for a long period. Most of his writings were compilations, although he authored several books himself, and manuscripts with his own handwriting are preserved today in the central Library of Damascus.

In fact, it was considered an honor and a privilege to study in his circle. Among the renowned Muslim scholars who studied under him, we mention Ibn ‘Abd al-Hadi and Ibn Rajab and others who oft-frequented his circles and sought his company, such as Imam Ibn Kathir.

Most scholars of the time have acknowledged the author’s excellence, and profound knowledge of Qur’anic interpretation, commentaries on the prophetic traditions, and theology. His extensive knowledge and understanding of Qur’anic commentaries surpassed even some renowned theologians in Islamic history.

Ibn Kathir spoke of him in his book ‘Al-Bidayah wa-‘Nihayah, saying: “He was most friendly and kindhearted, he never envied anyone, he never caused harm to anyone, he never bore prejudice against anyone, and I was the closest to his heart. Furthermore, I do not know anyone who is more devout in his worship than him in our time.” A similar opinion also was quoted by Ibn Hajar.

Ibn al-Qayyim catered to all the branches of Islamic science and was particularly known and commended for his commentaries. Al-Hafiz Ibn Rajab spoke of his teacher, saying: “He was an accomplished scholar of Islamic science, and no one could rival him in his deep understanding of the Qur’an and prophetic saying, and his interpretations were unique in accuracy.”

Ibn Rajab narrated that his teacher Imam Ibn al-Qayyim al-Jawziyyah learned the science of prophetic sayings (Hadith) from al-Shahab al-Nabulsi, Qadhi Taqiyyu-Deen Sulaiman, and Fatimah Bint Jawhar, among others. During his early student life, Imam Ibn al-Qayyim sought the company of most sheikhs of this period, and he was particularly proficient in interpreting the Hanbali Muslim school of thought.

Imam Ibn al-Qayyim al-Jawziyyah was an avid and a resolute worshipper. He devoted long hours to his supererogatory nightly prayers, he was in a constant state of remembrance (zikr), and he was known for his extended prostrations. One could see on his face the clear expressions of piety and constant solicitation of God’s bounty and favors.

During Ibn al-Qayyim al-Jawziyyah’s imprisonment in al-Qal’ah prison in Damascus, he was constantly reading the Qur’an, and studying its meanings. Ibn Rajab noted that during that period of seclusion, he gained extensive spiritual success, as well as he developed a great analytical wisdom, knowledge, and understanding of the prophetic traditions.

Upon his release, he performed the pilgrimage to Makkah several times, and sometimes he stayed in Makkah for a prolonged period of devotion and circumambulation of the sacred Ka’abah.

Al-Nu’man al-Alsi al-Baghdadi once said: “His interpretations are unique in accuracy.” The renowned Muslim scholar al-Thahabi once said about him: “He gave great attention to details and references to the prophetic traditions.” Furthermore, Shaikh Burhan al-Deen al-Zari’ spoke of him saying: “No one is as cognizant as Ibn al-Qayyim was in his time.”

Ibn al-Qayyim al-Jawziyyah’s contributions to the Islamic library are extensive, and they particularly deal with the Qur’anic commentaries, and understanding and analysis of the prophetic traditions (fiqh-u Sunnah).

He compiled a large number of studies besides his own books, including:

Ibn al Qayyim al Jawziyyah died in the city of Damascus the year 751 AH/1350 C.E. when he was scarcely 60 years old and was buried at the cemetery of Bab al Saghir, near the grave of his father.