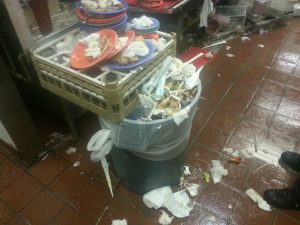 The fact that individuals attach importance to nobody but to themselves, and thus show no true love and respect to anybody, eventually introduces such a way of living.

The primitive rationale, making to survive the ultimate goal of life, causes its members to drift into a disorganized lifestyle. One of the grounds of this mentality is to have more time to take pleasure from life. This goal, manifesting itself in common phrases like to make the most of life or to savor the moment, is eagerly promoted and encouraged, as being the contemporary lifestyle.

There is another point that deserves mention here: the fact that individuals attach importance to nobody but to themselves, and thus show no true love and respect to anybody, eventually introduces such a way of living. This situation becomes most apparent in marriages in which couples lose mutual respect. Just after marriage, both sides do not hesitate to behave in a way they never dared before the wedding. Spending all day in pajamas with an unwashed face, uncombed hair and bad breath, or living in a house where the kitchen surfaces overflow with dirty dishes the whole day long are all the outcome of this mentality.

Indeed, this mentality brings nothing but difficulty, disorder, and chaos to the lives of ignorant people. On the pretext of not wasting time, they avoid many things that would bring an aesthetic touch to their lives. They deal with only the essentials and do not exert themselves to make their environment beautiful. For instance, they do not pay attention to details while doing housework. They often find it difficult to clean up; just not seeing the dirt all around is most of the time a sufficient excuse for not doing any cleaning. Some people perceive ironing, taking a shower, changing dirty linen, towels, clothes or tidying their room as a waste of time. They don’t wash their clothes unless an obvious stain or dirt appears on them. They can’t be bothered to shave. Especially in cold weather they dislike taking a bath. Mostly they only wash their hair. In some cultures, women have a practical solution for this: they visit a hair-dresser once a week and never feel the need to wash their hair until the next visit to the hair-dresser. Instead of taking a shower, they generally camouflage any undesirable odor with scents and deodorants, which makes it even more disturbing. Ignorant people give importance to the outer appearance of their clothes, yet they don’t feel the necessity to wash clothing which gives off a strong smell of sweat, food or cigarettes.

This primitive understanding of hygiene is especially widespread among young people. Their favorite clothes are worn-out or ripped jeans soaked in the dirt. In universities and discos or on the streets, it is very popular to sit on pavements or steps, wearing dirty leather jackets and, muddy boots, and to carry faded satchels. They generally do not tidy their wardrobes; dirty clothes are thrown crumpled into the wardrobe, right next to the clean ones. The cleaning lady does all the cleaning once a week; and so as not to spend time on dish-washing, they generally prefer fast food.

Encouraged on the pretext of modernism, this understanding and lifestyle enjoy a special popularity among the section of society called intellectuals. The majority of these people mostly made up of journalists, authors, painters, actors, poets, and people in show business, project the image of the intellectual with dirty beards, greasy hair and untidy clothes. A next appearance with clean and well-pressed clothes, they believe, is something incompatible with their charisma. Such unsanitary conditions surely negatively influence these ignorant people. Be they young or old, they develop diseases caused by malnutrition and unsanitary conditions. Always inhaling cigarette smoke in their offices, shopping malls, cafe’s, etc., their skins turn yellowish and they suffer serious lung problems. However, these are the negative effects observed only on the body. Living in dirty and untidy places along with other people who likewise do not care about sanitary conditions has a negative effect on their psychology too. In time, they become entirely insensitive to beauty and aesthetics. This is actually the consequence of a choice they willingly make.

The Qur’an, on the contrary, encourages man to live in the cleanest and most beautiful places possible. Allah gives a detailed account of how believers should lead their lives in the Qur’an;

“And your garments keep free from stain!” (Al-Muddaththir: 4)

“You could possibly substitute: Allah loves those that turn to Him in repentance and strive to keep themselves (pure and) clean.” (Al-Baqarah: 222)

“O mankind! Eat of that which is lawful and wholesome in the Earth.” (Al-Baqarah: 168)

“They ask you as to what is allowed to them. Say: The good things are allowed to you.” (Al-Ma’idah: 4)

“He will make lawful for them all good things and prohibit for them only the foul.” (Al-A`raf: 157)

“Remember We made the House (The Ka`bah in Makkah) a place of assembly for men and a place of safety; made the station of Abraham a place of prayer; We covenanted with Abraham and Isma`il, that they should purify My House for those who walk round it, or use it as a retreat, or bow, or prostrate themselves (therein in prayer).” (Al-Baqarah: 125)

“ (Others) said: Your Lord best knows how long you have tarried. Now let one of you go with this silver coin into the city, and let him see what food is purest there and bring you a supply of it.” (Al-Kahf: 19)

“To John, we said: ‘Observe the Scriptures with a firm resolve’. We bestowed on him wisdom grace and purity, and he was devout.” (Maryam: 12)

In the name of modernism, ignorant people create unsanitary and disorganized environments with their own hands. On the other hand, by complying with the principles of the Qur’an, believers enjoy the beauties of this life before attaining the Hereafter.