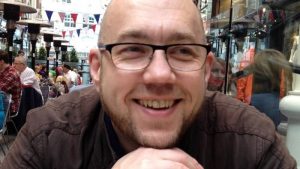 Please realize that you are an ambassador of our faith. Be it your appearance, dress or name, non-Muslims look at you as a representative of Islam. So, please make sure that you represent it well.

My name is Martin, from Leeds in the UK; I converted to Islam 16 years ago when I was 29.

I would describe myself as a white Brit of Irish ancestry and I was born into a Catholic family. I was an altar boy for some time and my father had wanted to be a priest.

In those days, I knew nothing about Islam. To be honest, I would have struggled to distinguish between Muslims, Hindus, and Sikhs. I was just a regular person who enjoyed socializing with friends, watching football, meeting people. You know, the normal stuff.

Then I met a Muslim woman of French/Moroccan origin. She was in the UK on a work placement as part of a college course she was undertaking. She stayed with my parents as a host family as a way of improving her English.

We were attracted to each other and began a relationship. Soon after, she told me that we could only be together through marriage. And that would need me to convert to Islam.

I was initially reluctant to do this, as Islam was very strange to me. Yet, I set out to meet with Muslims and learn more about the religion.

Sadly, it was not a good experience.

All I wanted was for someone to teach me the basics of the religion, in clear English and in a way that was easy to understand.

Yet all the Muslims I could find would use excessive amounts of Arabic or Urdu in explaining their understanding of the religion. On top of that, they were very attached to their native cultures in terms of clothing and mannerisms. Nothing I could see in them made me feel that I could belong as a Muslim.

Anyhow, I decided that if I really wanted to learn about Islam, I would have to teach myself. Therefore, I began reading book after book.

I was pleasantly surprised to discover that Islam shared its lineage with Christianity and Judaism, and everything I read just resonated with my soul.

After months of learning, I felt confident that Islam was the true religion from God and I was ready to convert.

So, alone with Allah and His Angels as my witnesses, I recited the testimony of faith and entered into Islam. Thereafter, I considered myself Muslim.

A few months later, I signed up for some Islamic part-time classes at the university. The teacher was a convert and so were several other students. Finally, I met people I could relate to and that is when my practicing of Islam really began.

As a child, I did have a dialogue with God, but it somehow stopped. Islam rekindled that dialogue; reconnected me with Him and removed any intermediaries in our relationship.

Martin’s advice to people who think about converting to Islam…

Take your time. Ask Allah for guidance and ease. And please be inquisitive… Islam has an answer for everything and questions are welcomed!

Oh, and if you are scared about circumcision (like I was), then don’t worry because you do not have to circumcise to become Muslim!

Please realize that you are an ambassador of our faith. Be it your appearance, dress or name, non-Muslims look at you as a representative of Islam. So, please make sure that you represent it well.