How is Mohamed Salah an inspiring example of da`wah? 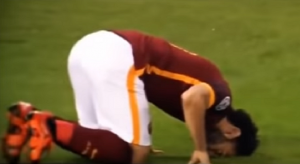 Mohamed Salah have been known to prostrate after scoring a goal.

The 25-year-old Egyptian forward has scored 31 goals in 34 matches this season so far. But the fact is he is a practicing Muslim sends a worldwide message about Islam.

If there’s could be any name that could give the best da`wah is that name, “Mohamed”  “Salah”.

SO, we can learn a lot from Mohamed Salah,

A lot of us complain, they are Muslim and they want to be successful but they’re persecuted for being Muslim and named ‘Muhammad’. In fact this negativity pushes one down, making him give up. When you are negative you cannot grab opportunities.

That’s why a Muslim has to be positive to live a productive life.

2- Win people’s respect rather than begging for it

Mohamed Salah have been known to prostrate after scoring a goal. He celebrates his success by prostrating and making du`aa’; getting closer to Allah and expressing gratitude to Him.

4- Confidence in your identity

Salah didn’t change who he was based upon where he was. Rather he stood by his Islamic identity, his culture and Egyptian identity, moreover, he inspires other people through this identity.

5- Your belief doesn’t hold you back. Rather, it gives you an edge.

For Mohamed Salah, his belief is propelling him forward. He’s got talent and he uses his beliefs to propel it forward. So, every Muslim should build their talent and not blame people around you or your religion.

SO, remember Mohamed Salah in your du`aa’. He is doing excellent work being an inspiration to millions around the world.

Try to promote Islam in other fields rather than just expecting people to just accept Islam because he you hand them a free Qur’an or because you can talk very well about Islam. People want to see Islam. They’ve heard a lot about Islam, but they know need to see it.

May Allah help us all be better successful productive Muslims.