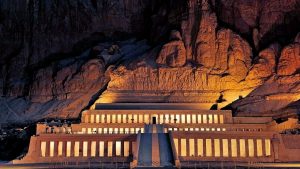 A good decade later Moses (peace be upon him) left Madian with his family in search of a livelihood elsewhere or, as some suggest, wanting to return incognito to Egypt.

Yet, Allah (glory be to Him) had other plans. En route, Moses noticed a fire. Since where there is a fire there must be people, he leaves his family behind as a precautionary measure and goes to either find some food or some news.

But this fire was not of the usual kind. It burned without devouring the bush from which it seemed to come, and a voice called from within ordering Moses to take off his shoes as a mark of respect.

He is further told to throw down his shepherd’s staff which turns into a snake, and to pick it up again and watch it regains its original shape. And his own hand changes color and becomes a pale white, without any sign of disease however.

And when Moses had completed the term and was traveling with his family, he perceived from the direction of the mount a fire. He said to his family, “Stay here; indeed, I have perceived a fire. Perhaps I will bring you from there [some] information or burning wood from the fire that you may warm yourselves.” But when he came to it, he was called from the right side of the valley in a blessed spot – from the tree, “O Moses, indeed I am Allah, Lord of the worlds.” And [he was told], “Throw down your staff.” But when he saw it writhing as if it was a snake, he turned in flight and did not return. [Allah said], “O Moses, approach and fear not. Indeed, you are of the secure. Insert your hand into the opening of your garment; it will come out white, without disease.

And draw in your arm close to you [as prevention] from fear, for those are two proofs from your Lord to Pharaoh and his establishment. Indeed, they have been a people defiantly disobedient.” He said, “My Lord, indeed, I killed from among them someone, and I fear they will kill me. And my brother Aaron is more fluent than me in tongue, so send him with me as support, verifying me. Indeed, I fear that they will deny me.” [Allah] said, “We will strengthen your arm through your brother and grant you both supremacy so they will not reach you. [It will be] through Our signs; you and those who follow you will be the predominant.” (Al-Qasas 28:29-35)

Frightening, he had to go and confront Pharaoh with the demand to release the Israelites from bondage. It helped him overcome the fear to face up to the tyrant who would surely have him killed, and it provided him with the miracles needed to make the pharaoh’s magicians take notice.

Still, Moses is unsure whether he will be up to the task, and asks for his elder brother Harun (Aaron) to come along with him. This wish is granted, although we do not know whether Aaron had already caught up with Moses in Madian or was going to meet him upon his return to Egypt.

Pharaoh, who considered himself a god to be worshipped, was anything but delighted to have Moses come back and challenge him with a higher authority, demanding the release of the Israelites.

But when Moses came to them with Our signs as clear evidences, they said, “This is not except invented magic, and we have not heard of this [religion] among our forefathers.” And Moses said, “My Lord is more knowing [than we or you] of who has come with guidance from Him and to whom will be succession in the home. Indeed, wrongdoers do not succeed.” And Pharaoh said, “O eminent ones, I have not known you to have a god other than me. Then ignite for me, O Haman, [a fire] upon the clay and make for me a tower that I may look at the God of Moses. And indeed, I do think he is among the liars.” (Al-Qasas 28:36-38)

He was hardly inclined to consider this man a true prophet, having previously raised him in his own household but finding that, instead of showing him gratitude he had turned against him.

[Pharaoh] said, “Did we not raise you among us as a child, and you remained among us for years of your life? And [then] you did your deed which you did, and you were of the ungrateful. (Al-Shura 26:18-19)

For this purpose Pharaoh arranged for a magnificent public event, and the magicians, who had been honing their skills in preparation, were given further prizes and incentives should they win the contest.

And We certainly showed Pharaoh Our signs – all of them – but he denied and refused. He said, “Have you come to us to drive us out of our land with your magic, O Moses? Then we will surely bring you magic like it, so make between us and you an appointment, which we will not fail to keep and neither will you, in a place assigned.” [Moses] said, “Your appointment is on the day of the festival when the people assemble at mid-morning.” (Taha 20:56-59)

Nobody doubted the outcome, yet when Moses’ staff devoured all the magic they conjured, and rendered it void; the magicians realized that a greater power was involved and submitted to Moses and his religion, much to the dismay of Pharaoh.

So the magicians fell down in prostration. They said, “We have believed in the Lord of Aaron and Moses.” [Pharaoh] said, “You believed him before I gave you permission. Indeed, he is your leader who has taught you magic. So I will surely cut off your hands and your feet on opposite sides, and I will crucify you on the trunks of palm trees, and you will surely know which of us is more severe in [giving] punishment and more enduring.” They said, “Never will we prefer you over what has come to us of clear proofs and [over] He who created us. So decree whatever you are to decree. You can only decree for this worldly life. Indeed, we have believed in our Lord that He may forgive us our sins and what you compelled us [to do] of magic. And Allah is better and more enduring.” (Taha 20:70-73)

So the magicians fell down in prostration [to Allah ]. They said, “We have believed in the Lord of the worlds. The Lord of Moses and Aaron.” [Pharaoh] said, “You believed Moses before I gave you permission. Indeed, he is your leader who has taught you magic, but you are going to know. I will surely cut off your hands and your feet on opposite sides, and I will surely crucify you all.” They said, “No harm. Indeed, to our Lord we will return. Indeed, we aspire that our Lord will forgive us our sins because we were the first of the believers.” (Al-Shuara 26:46-51)

The miraculous signs given to Moses, however, made Pharaoh cautious, and he decided to put the matter off for another date in order to have his claim tested. This event was followed by a showdown between Moses and pharaoh over many years during which Egypt was plagued with one disaster after the other as a warning and punishment from Allah.

And We certainly seized the people of Pharaoh with years of famine and a deficiency in fruits that perhaps they would be reminded. But when good came to them, they said, “This is ours [by right].” And if a bad [condition] struck them, they saw an evil omen in Moses and those with him. Unquestionably, their fortune is with Allah , but most of them do not know. (Al-Araf 7:130-131)

At the same time the Israelites were suffering persecution and hardship until many of them also turned against Moses in frustration, blaming him for the turn of events.

After years of suffering throughout Egypt, the pharaoh finally conceded that Moses (peace be upon him) should be allowed to lead the Israelites out of captivity. When they had hardly a day’s head start, however, he regretted his decision and pursued them ahead of his army.

So Pharaoh pursued them with his soldiers, and there covered them from the sea that which covered them. (Taha 20:78)

The Israelites lose faith in Moses (peace be upon him) and fear annihilation, but he parts the sea with his staff to let them through, drowning the Egyptians after them.

And when the two companies saw one another, the companions of Moses said, “Indeed, we are to be overtaken!” [Moses] said, “No! Indeed, with me is my Lord; He will guide me.” Then We inspired to Moses, “Strike with your staff the sea,” and it parted, and each portion was like a great towering mountain. And We advanced thereto the pursuers. And We saved Moses and those with him, all together. Then We drowned the others. Indeed in that is a sign, but most of them were not to be believers. (Al-Shura 26:61-67)