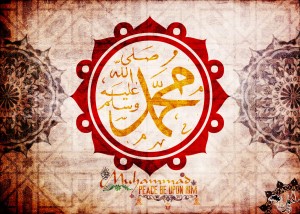 The Prophet was even merciful and compassionate when in war. He commanded his companions, “Do not kill women, old men, children, or religious monks and priests.”

We are going to make a thematic introduction to this verse.

Theme I: Islam Is Peace and Justice for All

This verse of the Glorious Quran defines the reality of the person of Muhammad (peace be upon him) emphasizing him as primarily characterized by mercy.

The most prominent feature describing the mission of Muhammad (peace be upon him), besides his comprehensiveness, is his being a mercy to humanity, not to mention to the whole of creation.

The mission of the Prophet (peace be upon him) thus is to communicate Allah’s mercy to the whole of humanity without restriction. This message is to be communicated by mercy and not by force, based upon the well-known verse,

This can be said to be the first unique characteristic of Islam that it is a divine message rooted in boundless mercy and this is defined by its universality and its call to the brotherhood of humanity based on a life of justice and spirituality, both of which are marks of mercy.

Theme II: Islam Cares for the Life of the Soul and Body

Islam is a way of life aimed at catering to and facilitating the needs of life, whether they are material or spiritual. Islam looks to preserve the life of the soul, intellect and family, as well as the economic life.

Also, it seeks to protect the physical life of individuals, which is highly valued in Islam. It is these five arenas that Islam looks to develop and better the conditions for their growth and well-being because these are the essential living arenas.

So, it was a demonstration of Allah’s Mercy that the Prophet Muhammad (peace be upon him) was sent with the religion that facilitates the needs of all facets of life.

Humanity is not left unto itself without guidance, but it is aided in the process of life and assured in time of hardship that life is more than just material existence. Rather, it has a spiritual aspect that transcends death.

The Prophet Muhammad (peace be upon him) teaches humanity the purpose of their life and how to establish justice in the process of realizing the needs and demands of daily life, without forgetting or neglecting the demands of the heart, soul and intellect.

Theme III: Islam and the Environment

The role of the Prophet (peace be upon him) according to the above verse is that of servant and educator. He (peace be upon him) taught humanity how to live in the most productive and meaningful way. He taught that human beings are not just responsible for being just to one another but also to other life beings.

According to Islam, establishing the justice requires that business and science are conducted in an environmentally friendly manner because the ethics of Islam demand that the human being be charitable and not greedy, considerate and not indifferent, and that his actions promote not reduce or stifle life. In fact, the role of the human being, in relation to the creation, according to Islam, is one of stewardship that is bound by self-accountability in this life and the next.

The problems of today when we look to the environmental crisis are rooted in a lack of consciousness of the real role of humanity which is clear in Islam.

Likewise, much of the environmental crisis is because of the greed and corruption run rampant in business dealings and the management of the world’s resources. Islam teaches that all creations are in a state of submission to the Creator.

So, from the lens of Islam all of creatures, including human beings, are servants and guests of Almighty Allah so long as they remain in existence. Therefore, humanity is obliged to act responsibly and not arrogantly, wisely and not hastily, sincerely and not hypocritically, and frugally and not extravagantly.

Even in the time of war, Muslims are obligated not to kill women, children, monks and priests, or even to destroy trees or animal life.

So, what is to be said at the time of peace? Even at the  time of war, Islam does not aim to destroy people’s life because the whole message of Islam is meant to save people’s life. The teachings of Islam order its adherents when camping or out in the desert or forest regions for example, not to relieve themselves on the roads, under trees or on things of value. All these injunctions are aimed at instilling a character that is concerned with others and environment. Because living involves cooperating with others, the Muslim is obliged to act responsibly and justly.

Theme V: Reaffirming the Identity of the Prophet Muhammad

The uniqueness of person of the Prophet Muhammad (peace be upon him) is that history has left us with a very accurate and detailed record of his doings, sayings and life history all which indicate to the reality of his mission and life. As an educator, he was occupied and concerned with the affairs of human life and how to teach humanity to realize that life is meaningful when they devote the worship to the One God who created us.

The power of Islam lies in this teaching that the human being was created to worship the Creator with sincere devotion. This worship is the purpose of our existence. We must submit in gratitude to our Creator worshipping Him alone while seeking his guidance and forgiveness. The test of life is about realizing this truth.