On World Hijab Day: Stand for Her Right to Cover

World Hijab Day (WHD) is an annual event in its fifth year. On February 1st of every year, WHD asks global citizens of all faiths to observe Hijab (head-covering) for a day in solidarity with Muslim women worldwide. 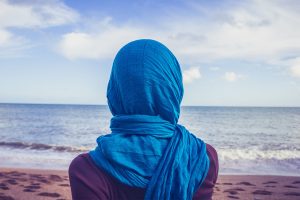 The overall mission of WHD is to create a more peaceful world where global citizens respect each other.

The overall mission of WHD is to create a more peaceful world where global citizens respect each other. Particularly, WHD focuses on fighting bigotry, discrimination, and prejudice against Muslim women. This is most crucial in these times where Hijab is being banned in some countries while in other countries, Muslim women are being targeted and harassed verbally and physically.

Below are some of the shocking but true headlines:

New York State assemblyman David Weprin issued an endorsement of World Hijab Day stating: “With hate crimes against Muslim-Americans tripling in 2016, it is important we take this moment to stand together with our fellow Americans on World Hijab Day. Rooted in the American principles of religious freedom and liberty, the World Hijab Day movement seeks to end the discrimination and judgment that comes with wearing a hijab.”

Nazma Khan, a New York native, initiated this global movement with the intent of bringing awareness on a subject that’s very dear to her and millions of Muslim women across the globe. While growing up in NYC, she was harassed both physically and emotionally on numerous occasions.

The presence of such discrimination heightened around 9/11 because of her human right to wear the hijab. Her purpose was to introduce her pain to others in hopes that no one will ever have to go through the emotional trauma simply because of the love they have for their faith. Consequently, on February 1st, 2013, she asked her fellow sisters of all faiths across the globe to don the hijab for one day.

Within eight days, she got responses from women residing in 67 different countries that represented a conglomerate of religious backgrounds, to include Christians, Jewish, Pagans, Wiccans, Rastafarians, Buddhists, Atheists etc. WHD gave an opportunity to citizens worldwide who were not familiar with the Islamic faith to open up dialogues with their Muslim neighbors, co-workers, and friends.

Additionally, WHD presented an opportunity for teachers to understand why their Muslim students wear the hijab. It also provided non-Muslim mothers a chance to better understand their daughter’s faith and the decision to wear hijab.

The negative perception on hijab allowed people to act upon their fears and hurt innocent women without a real and existing threat. WHD simply presented an opportunity for everyone to learn about hijab and its importance in the Islamic faith without perpetuating the negative generalizations in today’s society.

WHD has thousands of volunteers worldwide and 70+ WHD Ambassadors from over 45 countries. WHD Ambassadors come from all walks of life from a high school student to a Congresswoman in the Philippines. Last year alone, 150 countries partook in WHD.

In addition to that, WHD has been endorsed by many world renowned individuals including scholars, politicians, and celebrities worldwide. WHD was covered in mainstream news media including New York Times, BBC, CNN, Al-Jazeera, Huffington Post, etc to name a few. Recently, Time Magazine listed World Hijab Day in their world calendar, The Year Ahead 2017. It is estimated 190 countries will take part in WHD’17.

“I participated in World Hijab Day and it was a good experience that I will repeat. I live in a very small, very Christian town.  There were some strange looks and people were staring at me – and then looking away quickly when they realized I saw them looking. A few people seemed surprised that I spoke English. The fact that I was wearing hijab gave me the opportunity to talk to my step children about respect, difference, and peace.” (Talya Leodari -Jewish, USA)

We must STAND for Muslim women’s right to cover. There are many ways to show your solidarity.
*Attend the WHD event on Facebook and invite your friends: https://www.facebook.com/events/357711751248489
*Observe Hijab on Feb. 1st, 2017
*Use the hashtags: #IStand4Hijab and #WorldHijabDay
*Organize a WHD event in your community.
*Send emails or letters to local Mosques/religious congregations showing your support.
*Write letters to local officials about protecting Muslim women’s right to cover.

For more information or to support our campaign, go to http://worldhijabday.com

In the following video Nazma Khan tells us about the persecution she faced due to her hijab and why she started World Hijab Day..